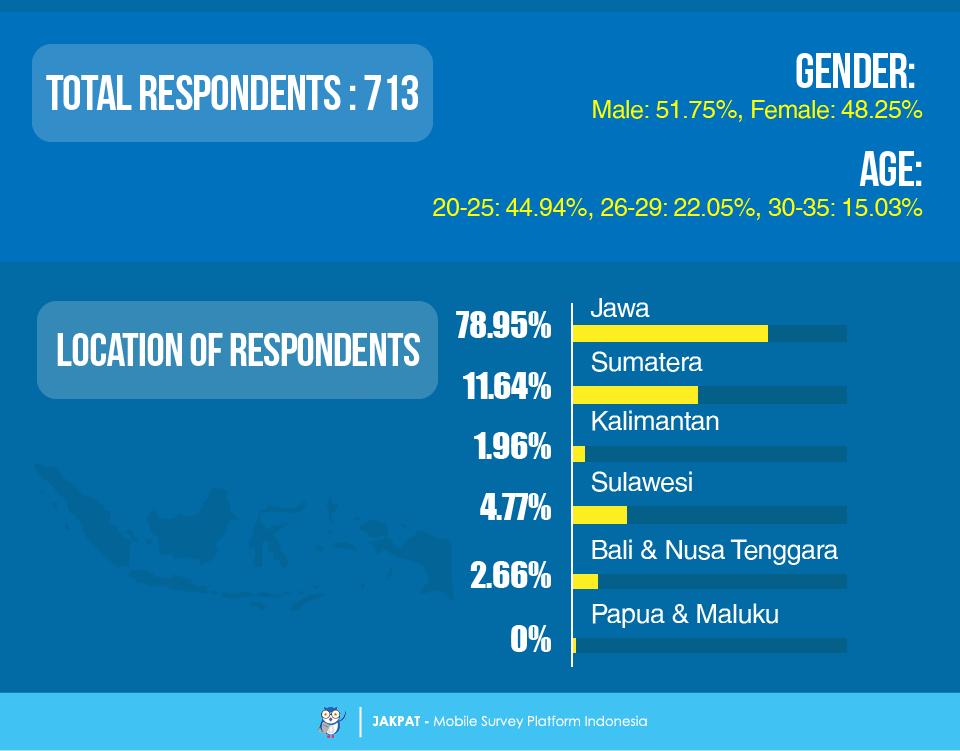 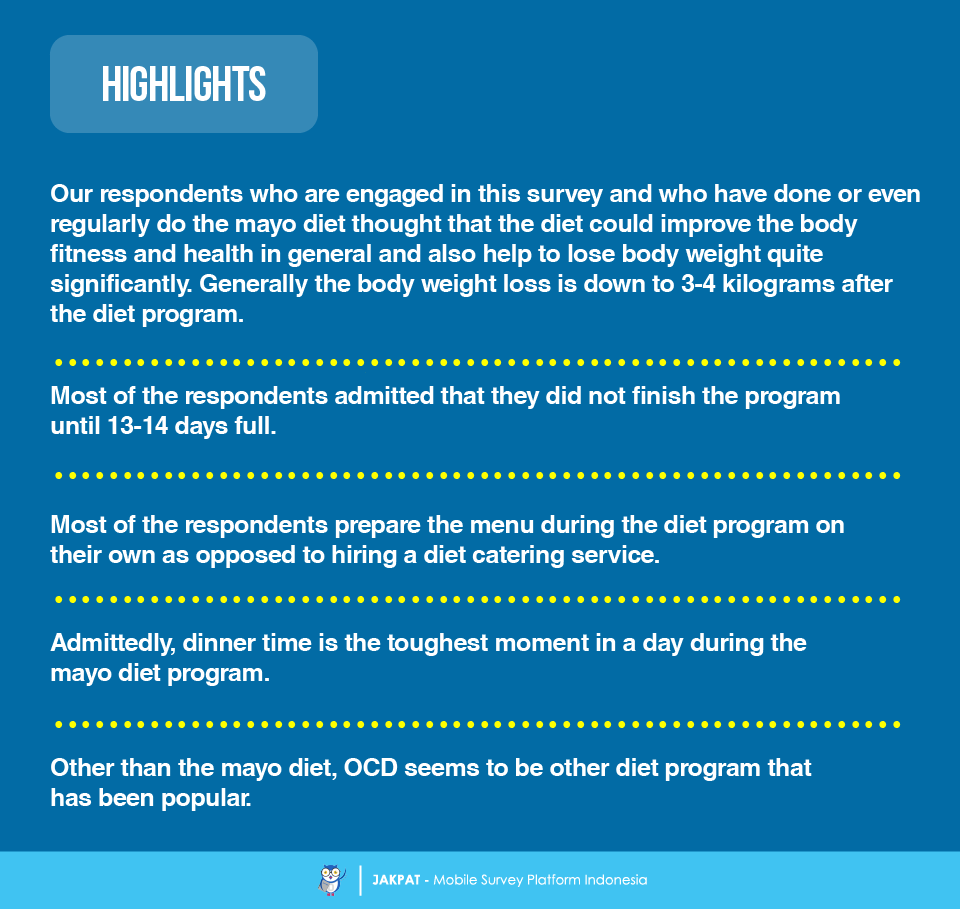 When a topic about a diet program is brought up it rarely talks about nothing but either weight loss or healthy living. One of the most well-known diet programs is the mayo diet. The mayo diet requires the doers to follow certain strict menu on every single day for 13-14 days straight. The promise it offers at the end of the program is quite a prize, which is a weight loss of up to 7-8 kilograms. For people who dream of losing some of their body weight in such a quick period of time the mayo diet must seem highly interesting. In this survey we wanted to focus on the mayo diet and a little bit about diet catering service. 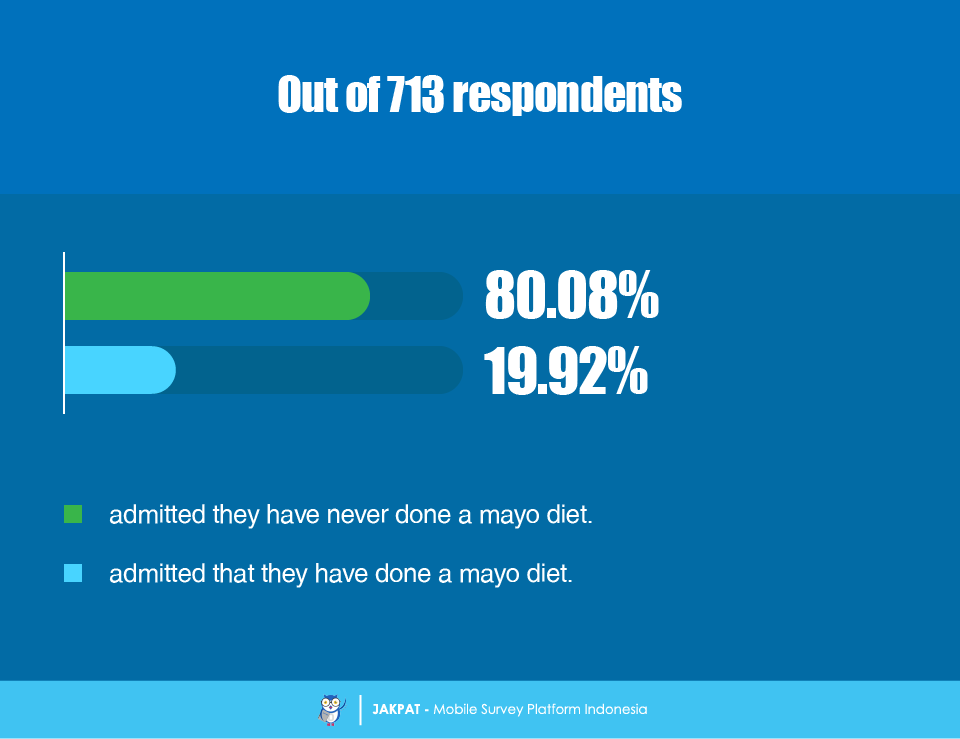 Out of 713 respondents, we found that only 19.92% admitted to have done a mayo diet, at least once. That is still quite a number to consider. 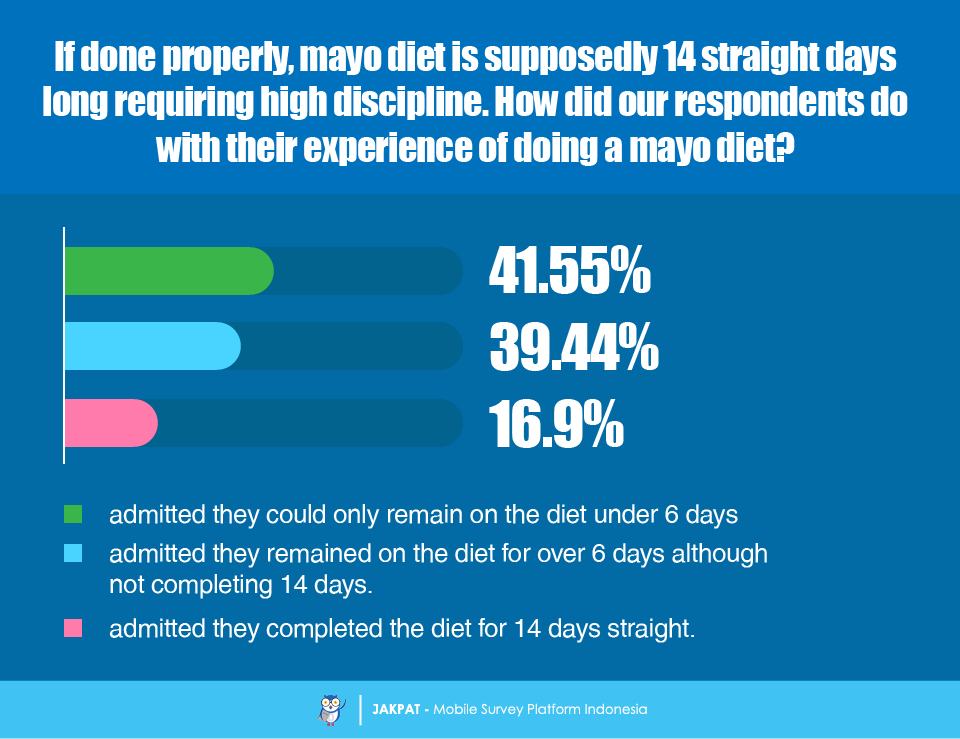 The mayo diet should last 13-14 days without a skip. The menu is set all for breakfast, lunch and dinner. To be strict to the menu is what makes this kind of diet feel tough. We found out that 41.55% of our responding mayo diet doers admitted that they could only remain on the diet program under six days. 39.44% admitted they remained on the diet program for over six days although not completing the 14 days rule. At last 16.9% admitted to have completed the diet for 14 days straight without a skip. That shows how the program could be quite a challenge despite the relatively short period of time for such a promising grand prize at the end as mentioned earlier.

Now we shall see how the diet itself gives effects to its doers. 31.69% of votes go to the improvement on the body fitness. That suggests that the doers generally feel better or healthier after the program. 26.76% of voted go to body weight loss. That is not surprising because the diet itself promises a significant loss of weight if done with required discipline. 20.42% of votes go to insignificant change or difference. This case of insignificant change may be due to a failure of doing the diet by the doers. Last but not least, 19.72% of votes go to tendency of feeling physically weak. This may have something to do with the doer’s physical condition prior to the diet program which causes a complexity. 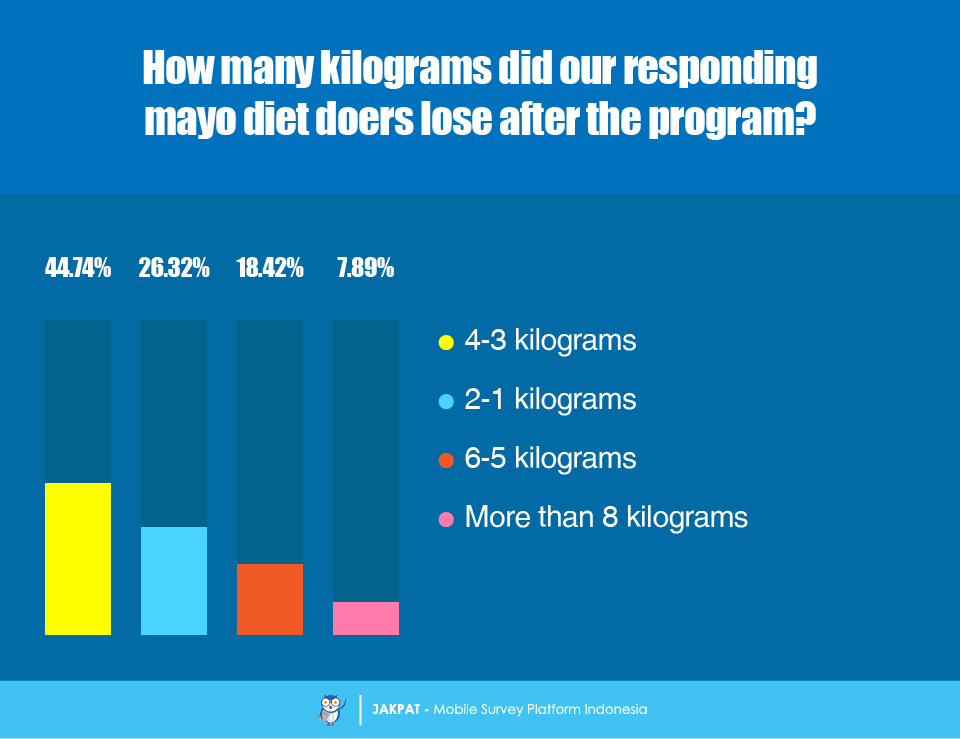 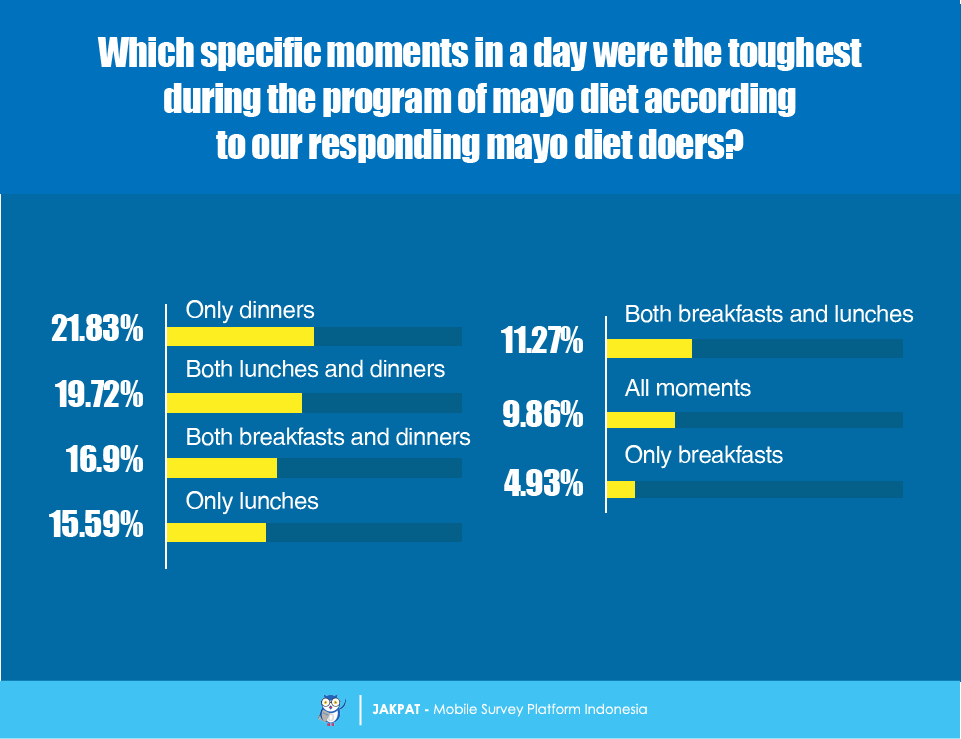 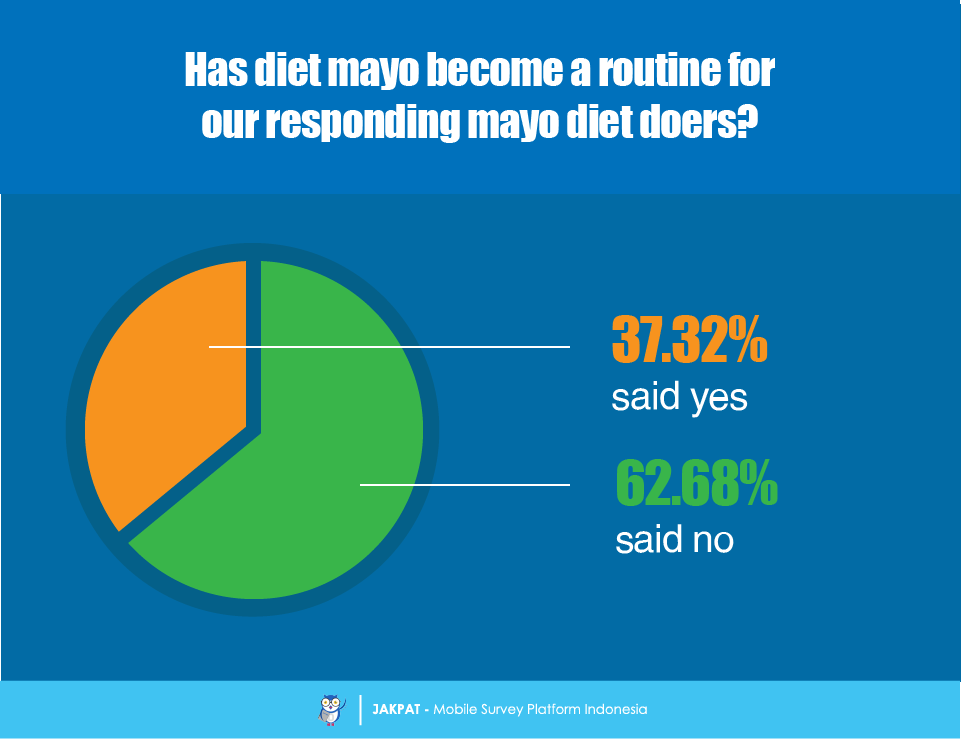 As much as the mayo diet seems very promising in its result, only 37.32% of our responding mayo diet doers do it regularly as a routine. 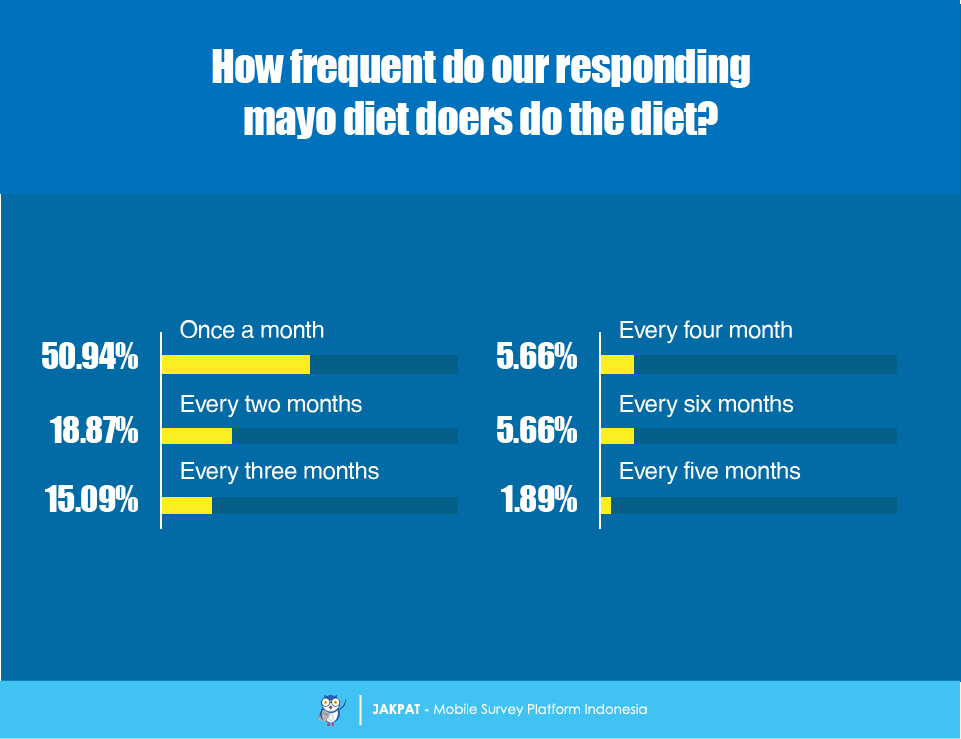 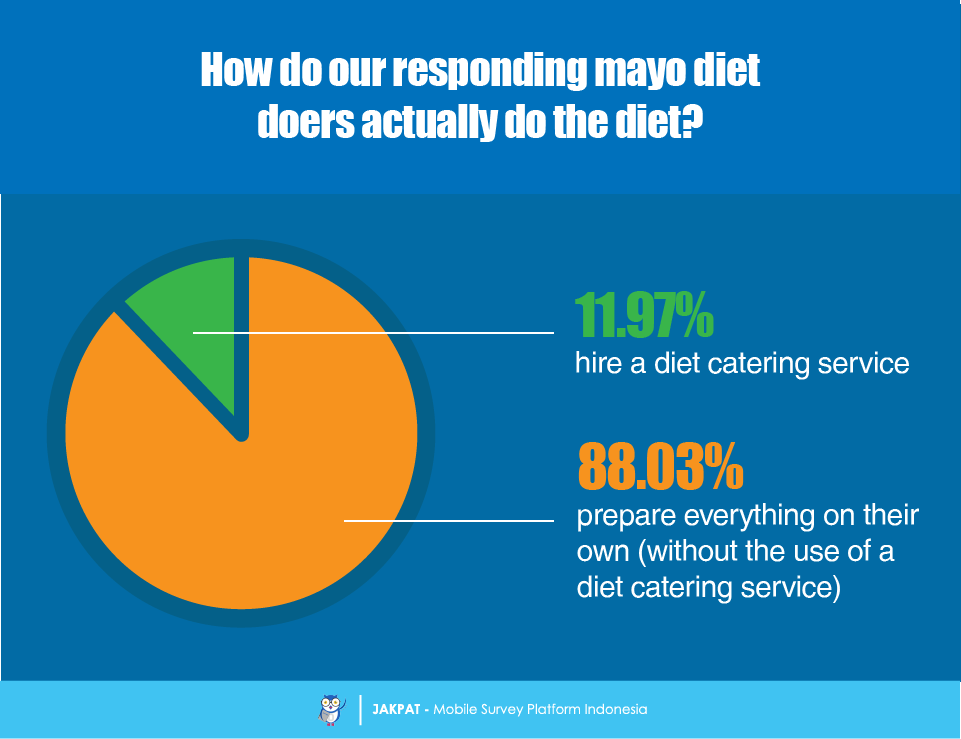 88.03% of our responding mayo diet doers admitted that they prepare the menu on their own. The opposite data shows 11.97% of the rest of the respondents prefer to hire a diet catering service. 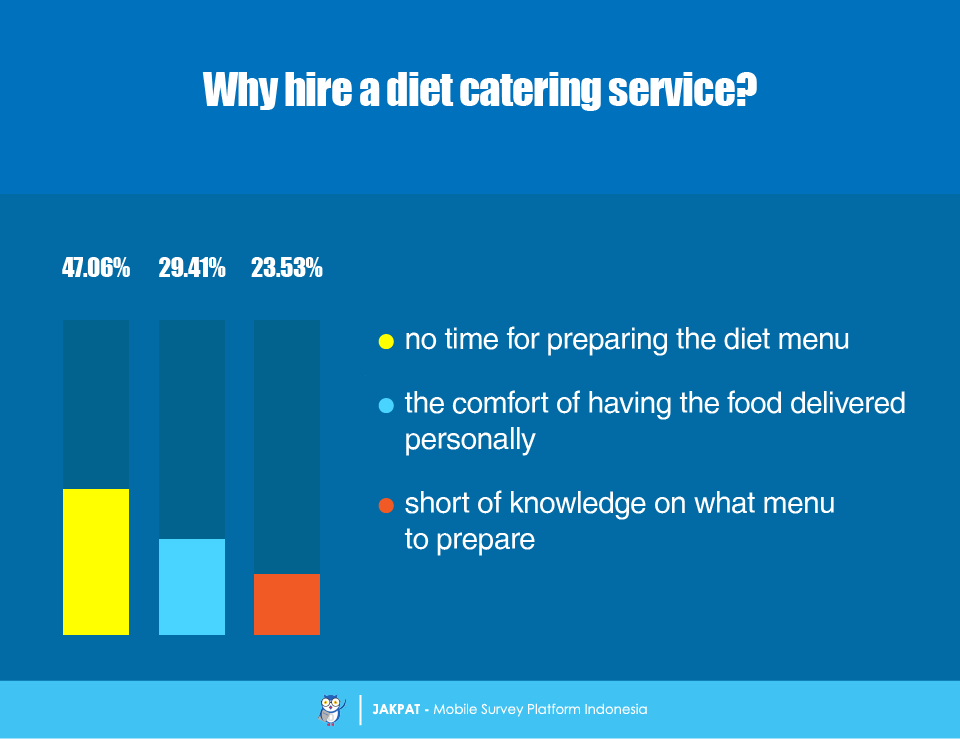 We then asked why hire such a service. 47.06% of the respondents said that they do not have the time for the preparation. 29.41% said that it is comfortable to have the food ready-to-eat delivered to them personally either at work or at the house. Then 23.53% admitted that they have only slight knowledge on what menu to prepare. 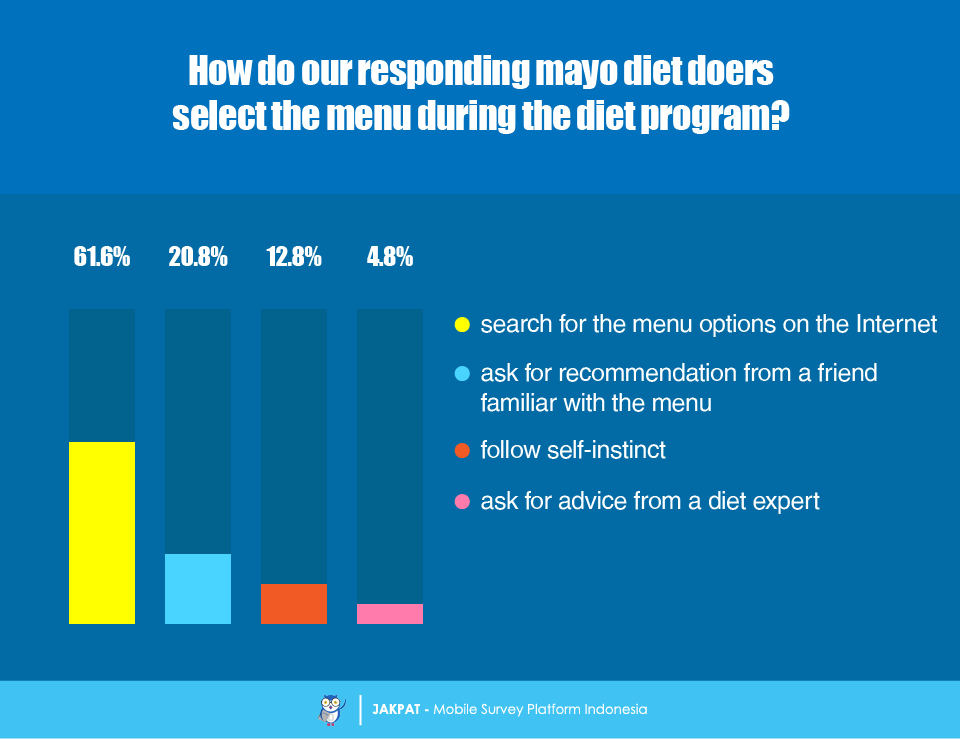 Then for the respondents who prepare everything on their own without the help from a catering service, 61.6% of them admitted to search for the menu options on the Internet. 20.8% admittedly asked for recommendation from a friend who is familiar with the diet menu. 12.8% said they followed their instinct –which may be the cause of insignificant change or result at the end of the program. Lastly, 4.8% said they asked for advice from a diet expert. 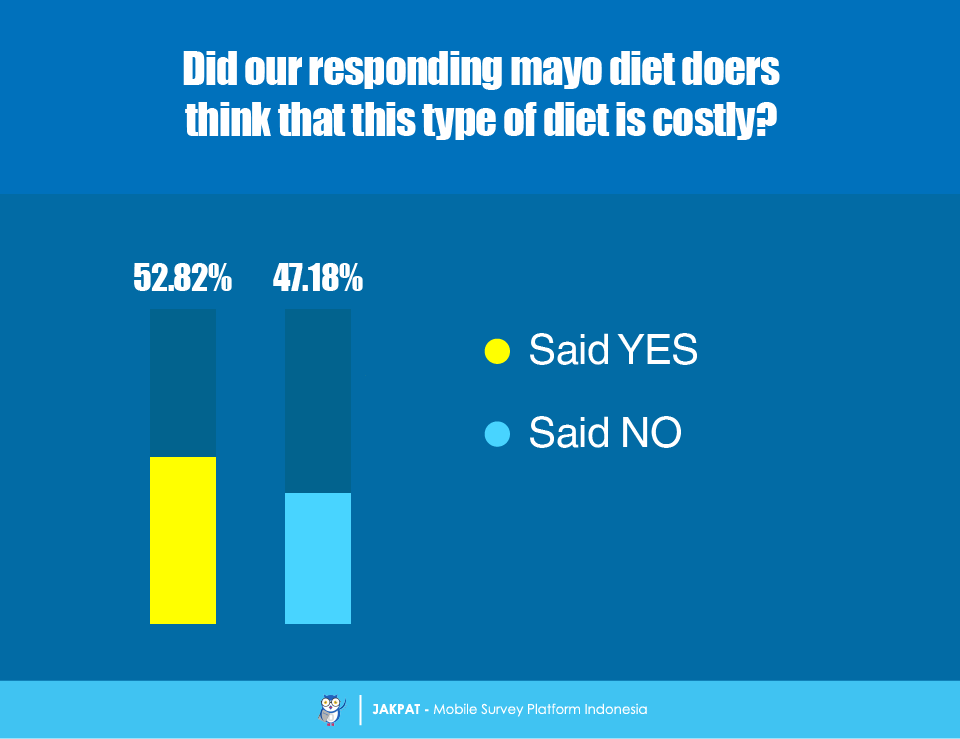 If you know the menu to be taken or consumed during a course of mayo diet, it may seem quite costly. We asked our responding mayo diet doers about that and 52.82% agreed that the diet is costly. 47.18% thought the opposite.

64.71% of our responding mayo diet doers who hire a catering service thought that they do not mind the service fee because it is still acceptable, meaning the service is not overly expensive. Only 35.29% thought the service is expensive. Again it can go down to how much is earned from every respondent’s job every month. 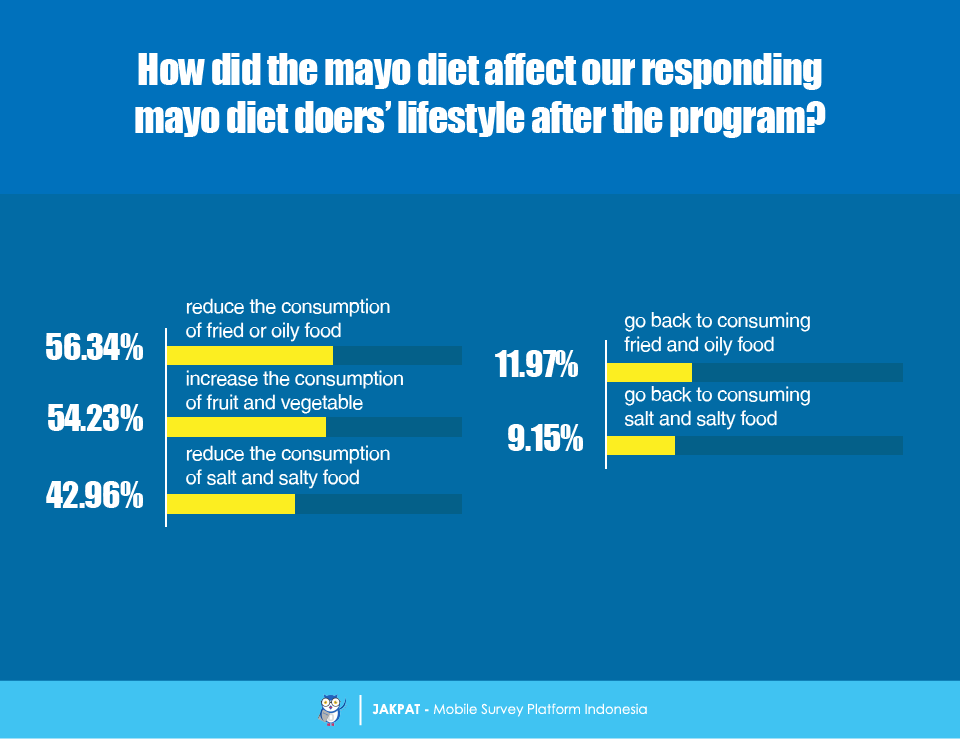 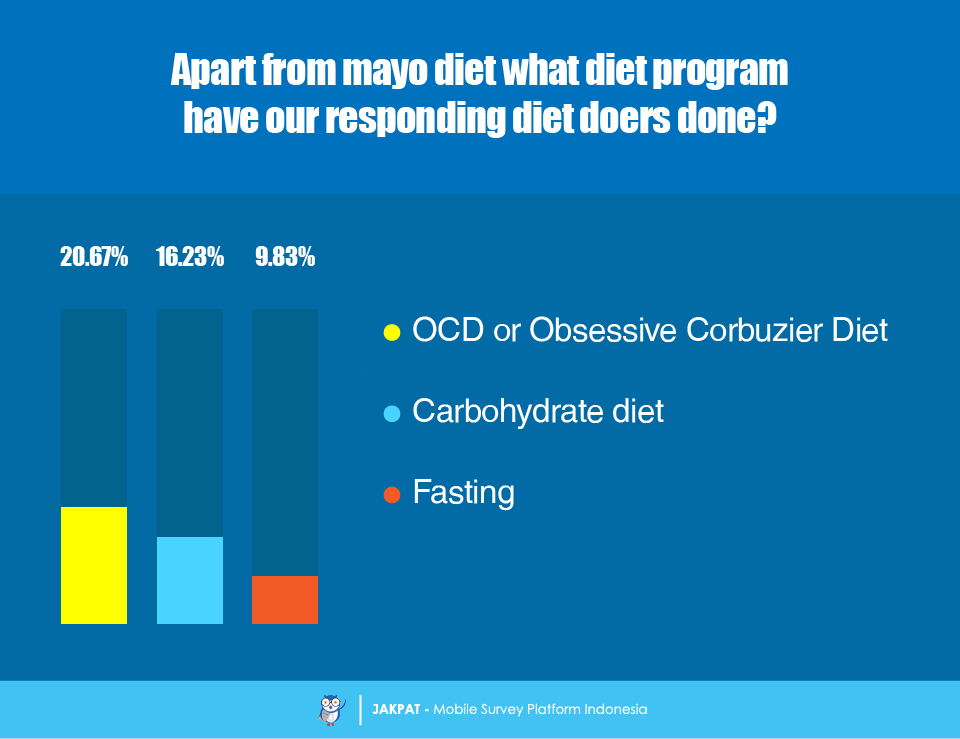 Apart from the mayo diet, 20.67% of the respondents claimed to also do the obsessive Corbuzier diet or more known as OCD. Other minor claims also go to carbohydrate diet (16.23%) and fasting (9.83%). 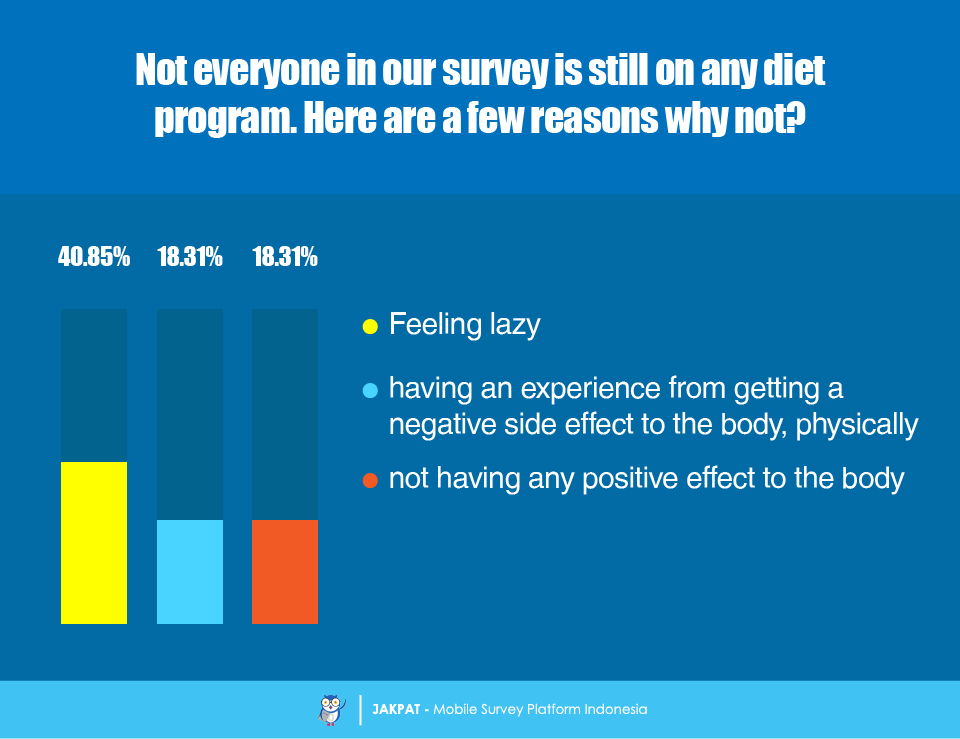