Along with the development of smartphones, mobile app presence can not be separated from smartphone users. Her presence brings convenience to the users to do many things, ranging from communicating to purchase an item / needs. There are many various choices of mobile app that users can freely choose what app is needed. Even many of which are available free of charge. This time Jakpat wants to know the behavior of users of smartphones in the mobile app purchase fee. The survey involved 176 respondents across Indonesia, aged 18-39 years. 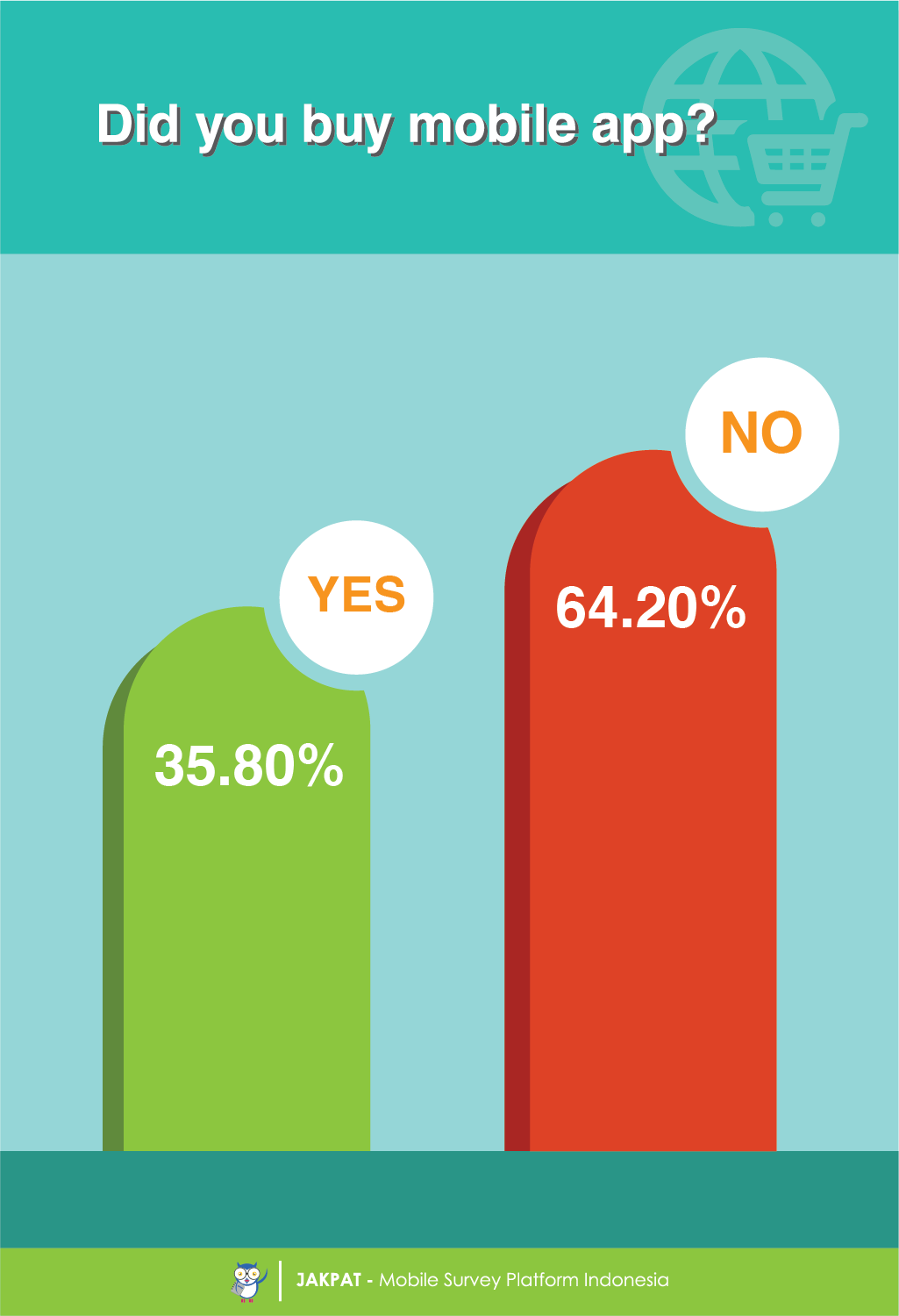 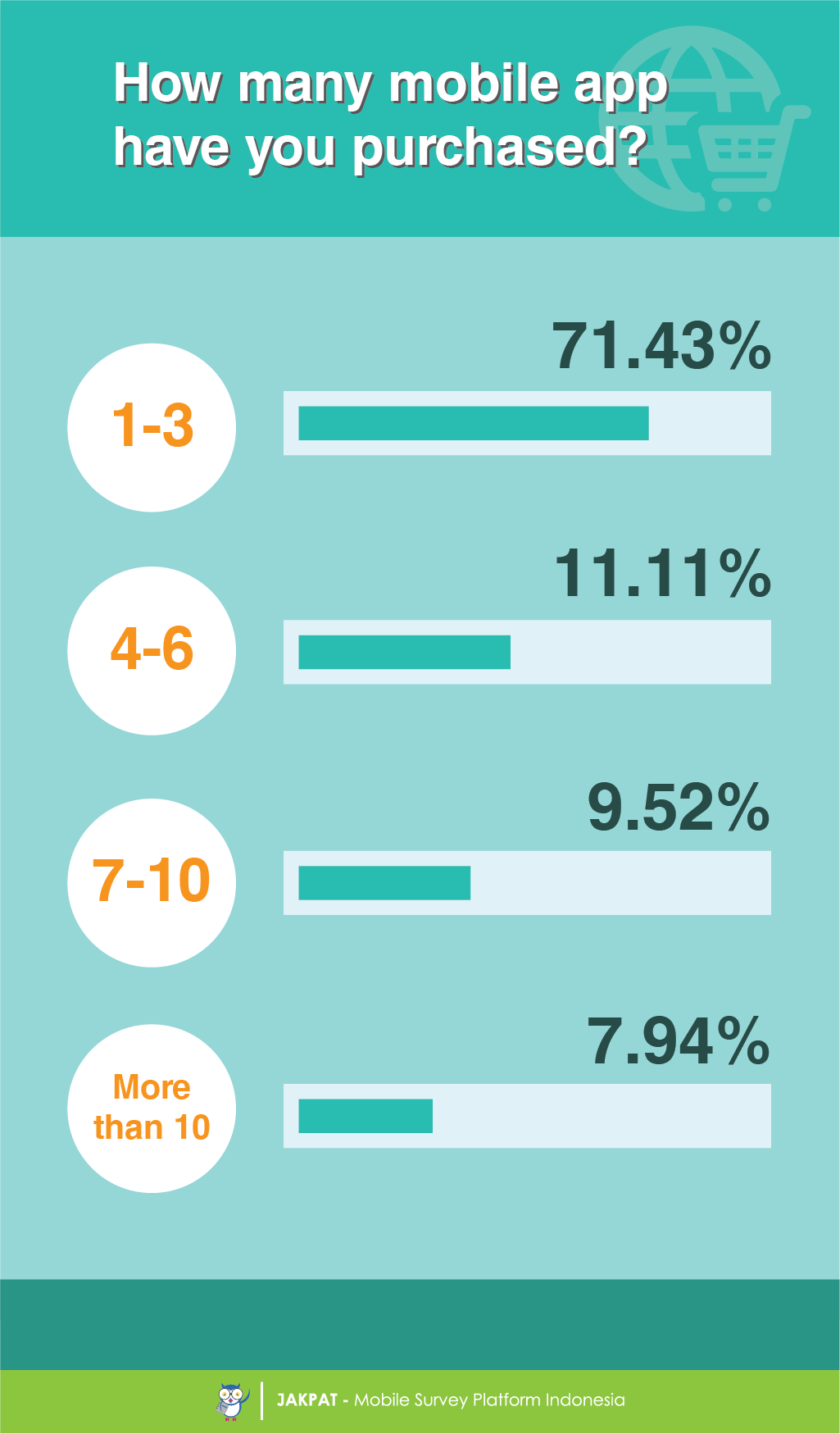 In Indonesia, mobile app purchases, leaving little problem. The way in which the payment using a credit card into a little barrier in the purchase of mobile app because many Indonesian people do not have it. Therefore, the existence of a third party who mediates the purchase of a mobile app to be the way that has been chosen by the respondents (46.03%). 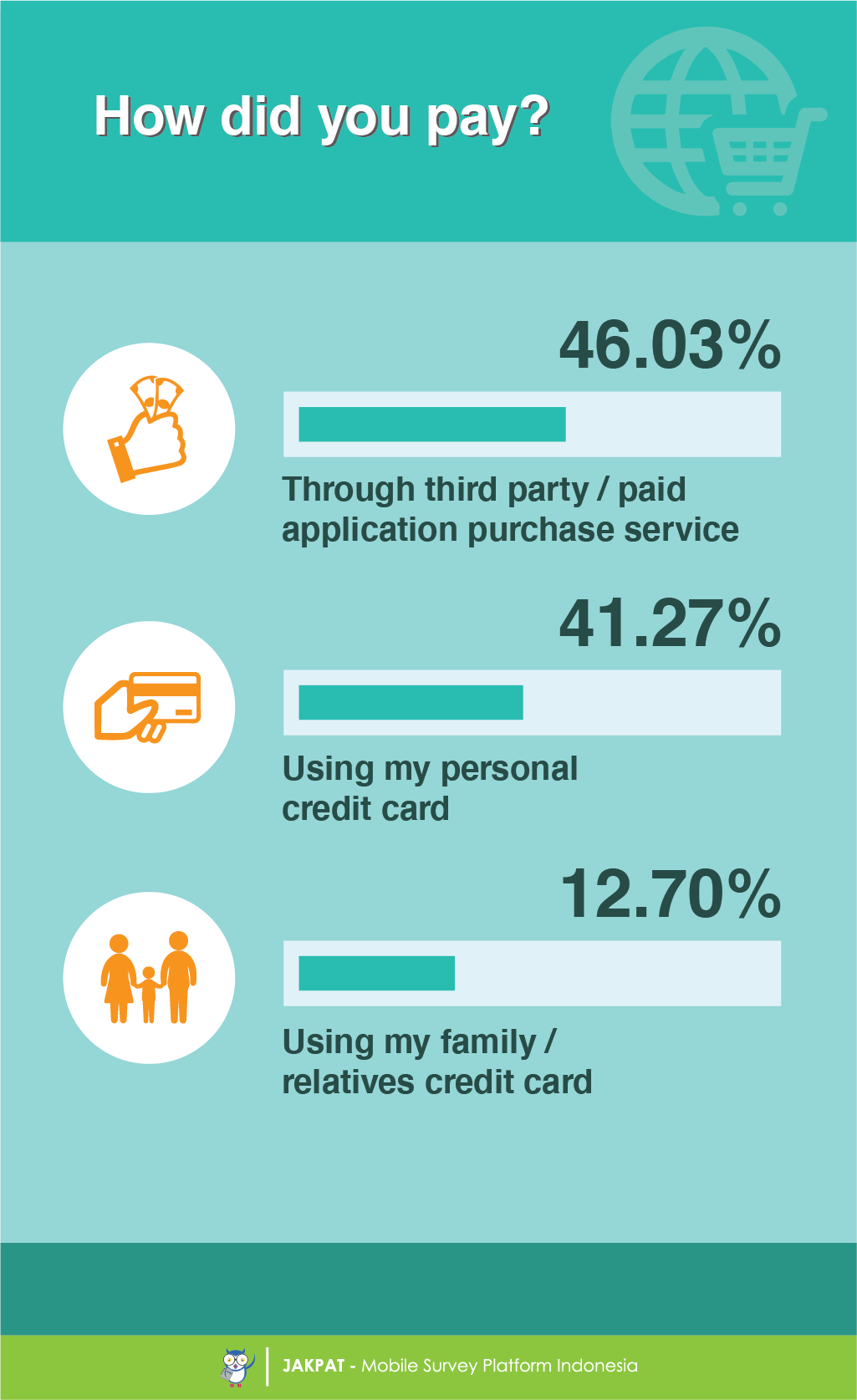 Apparently, games is still the most widely purchased (63.49%), while in the second position is occupied app both educational and music (14:29%).

Paid applications have several types. The majority of respondents choose paid to download (73.02%), while the type of in-app purchase was chosen by 41.27% of respondents. 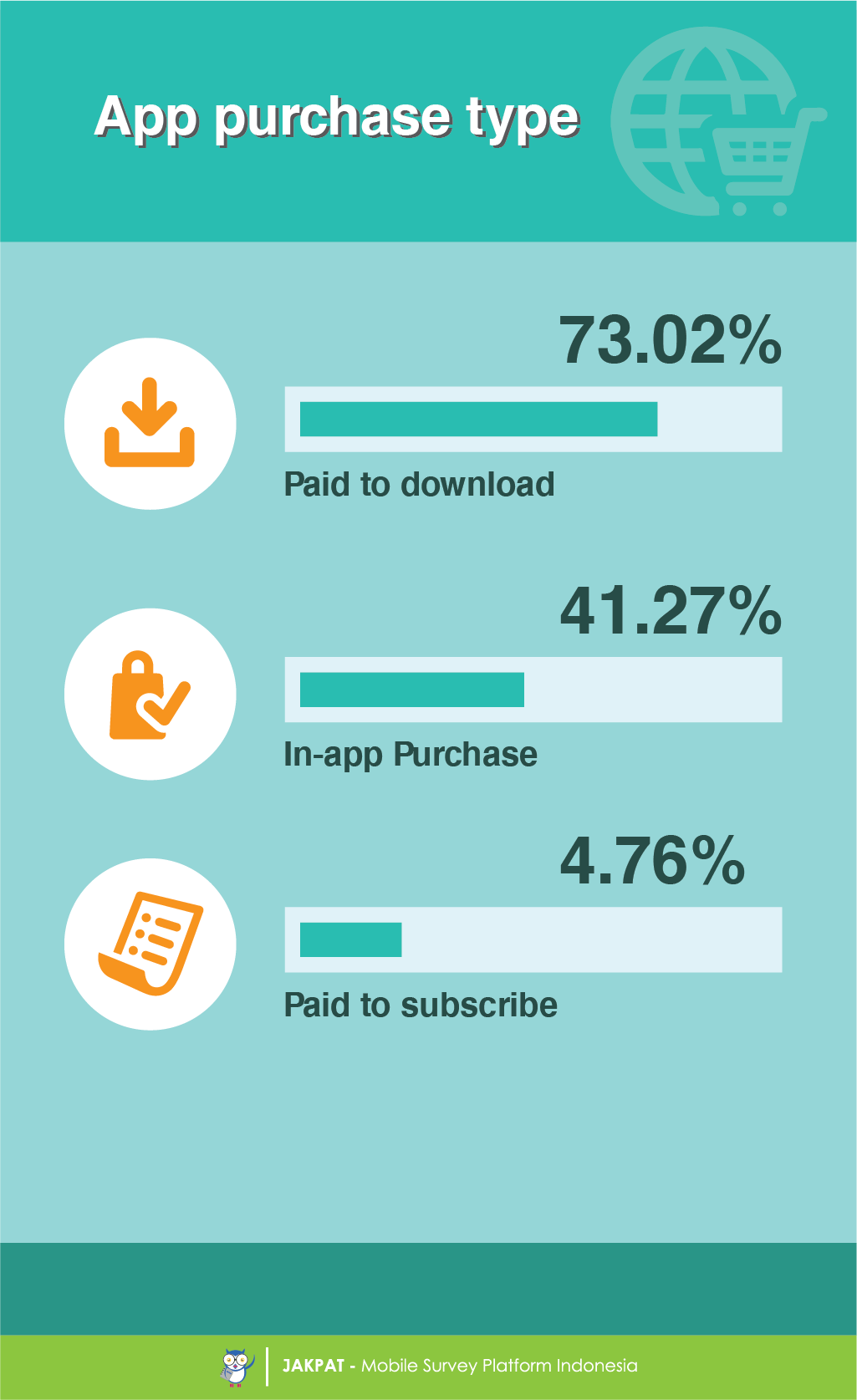 Reason app purchase can vary, the findings that we have encountered from the results of this latest survey, the pleasure is the main reason respondents (57.14%). In addition, the function of the app itself is also a reason respondents buy applications (55.56%). 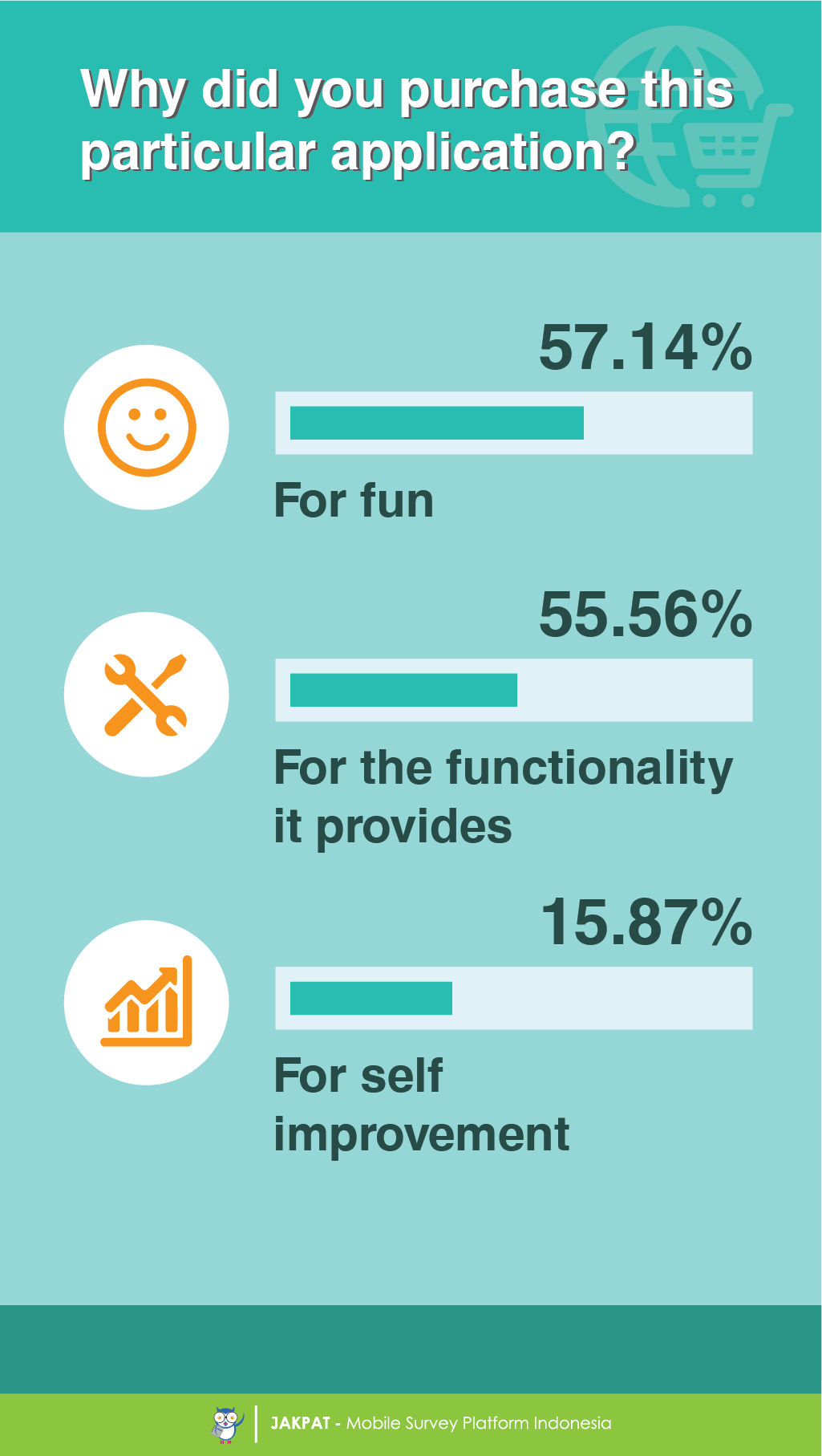 41.27% of respondents admitted to buying the application the last time in the last few months, while 33.33% of them said that in the last year.

To the respondents who claimed to have never bought the application, the main reason is mobile app is not essential to purchase. (40.27%). While 29.20% of them said no paid applications were keen to buy. 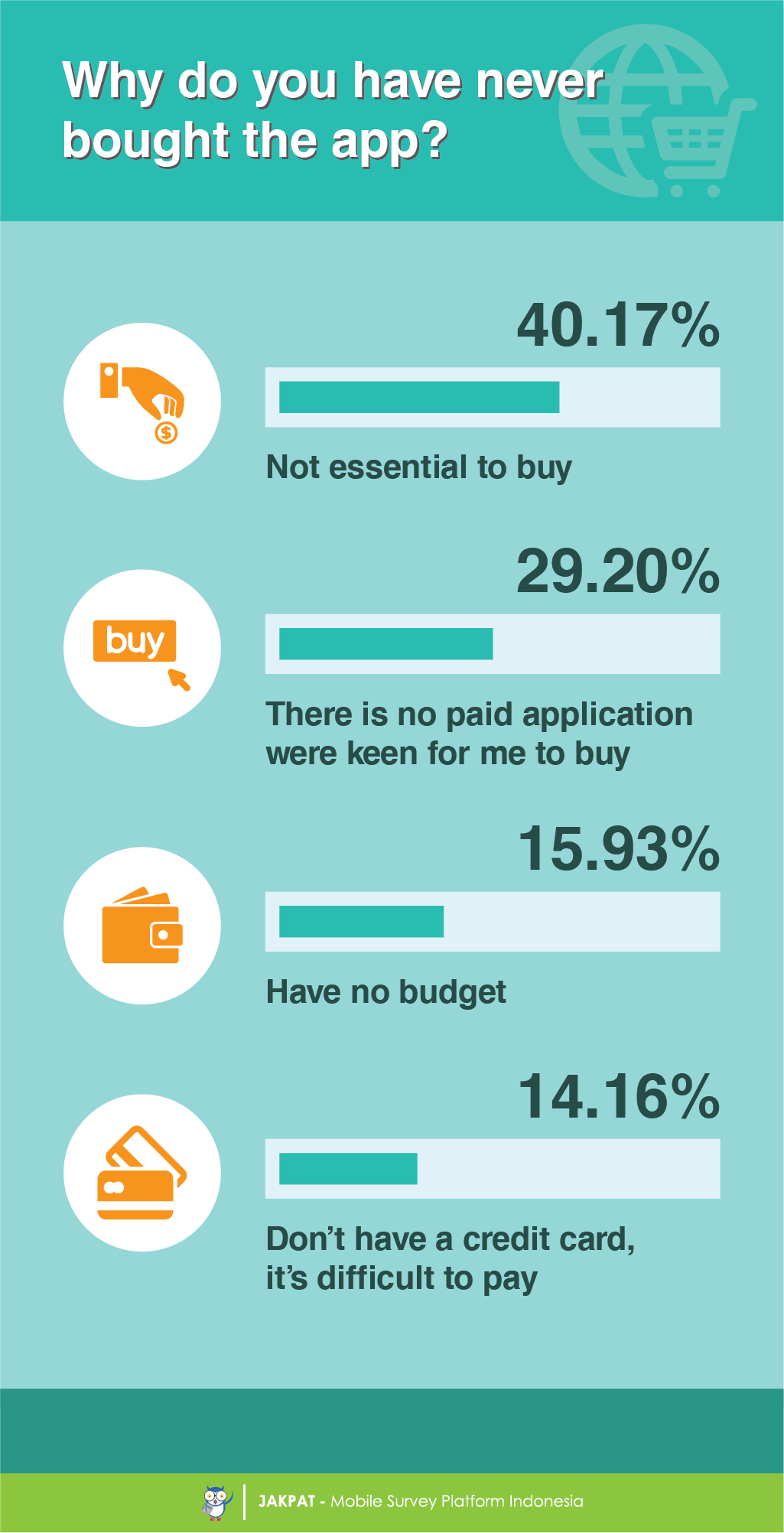 For more detail you can download XLS report at the button below. JAKPAT report consists of 3 parts which are 1) Respondent Profile, 2) Crosstabulation for each question and 3) Raw Data. Respondent profile shows you demographic profiles ( gender,age range, location by province, and monthly spending). Cross tabulation enables you to define different demographic segment preference on each answer.