Looks like WhatsApp, LINE, and BBM got their new opponent. Telegram, a cloud-based instant messaging service, which was initially released back in 2013, has officially released in Indonesia since 2015. With this messaging app, users can send messages and exchange photos, videos, stickers and files of any type. Telegram also provides end-to-end encrypted messaging, but its optionality and home-brew nature have been contested by security experts and cryptography researchers. In February 2016, Telegram announced that they had 100 million monthly active users, with 350,000 new users signing up every day, delivering 15 billion messages daily.[1] Therefore we wonder, with its worldwide popularity and all, how popular Telegram is in Indonesia and what do they do with the apps? Regarding to this matter, recently Jakpat has conducted a survey in order to see further toward Telegram users in Indonesia. This survey involved 1607 respondents from across Indonesia. For the further notes, Jakpat’s respondents in this survey are Indonesian smart-phone users, with a range of age from 17 to 40 year-old. 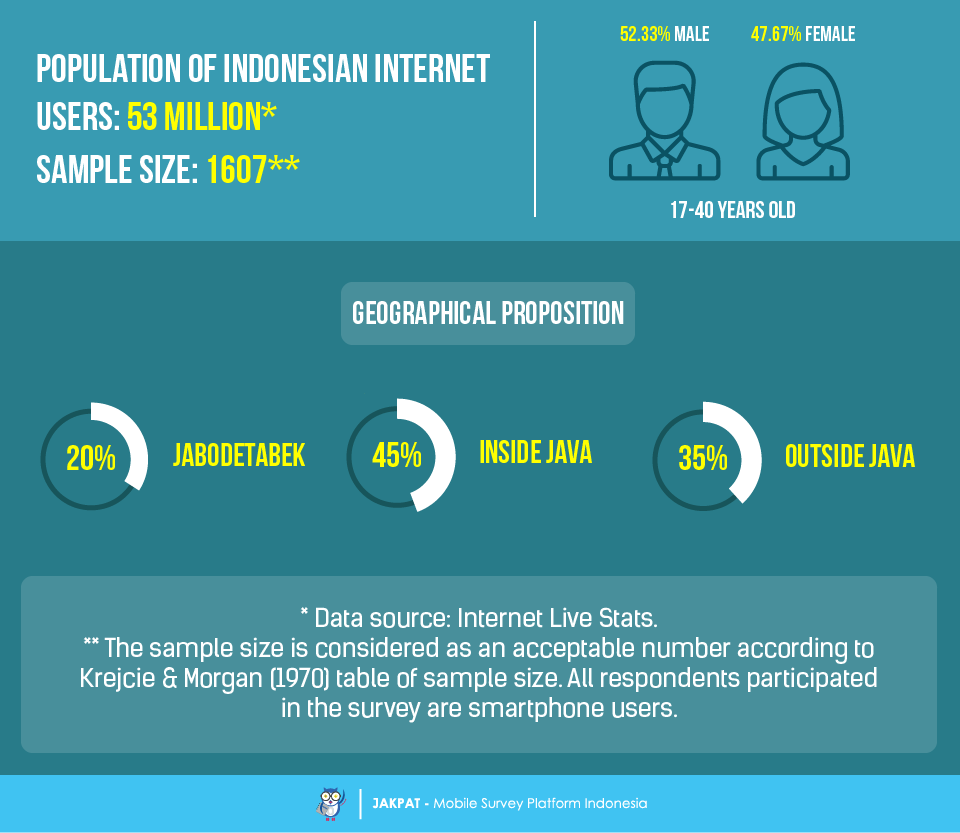 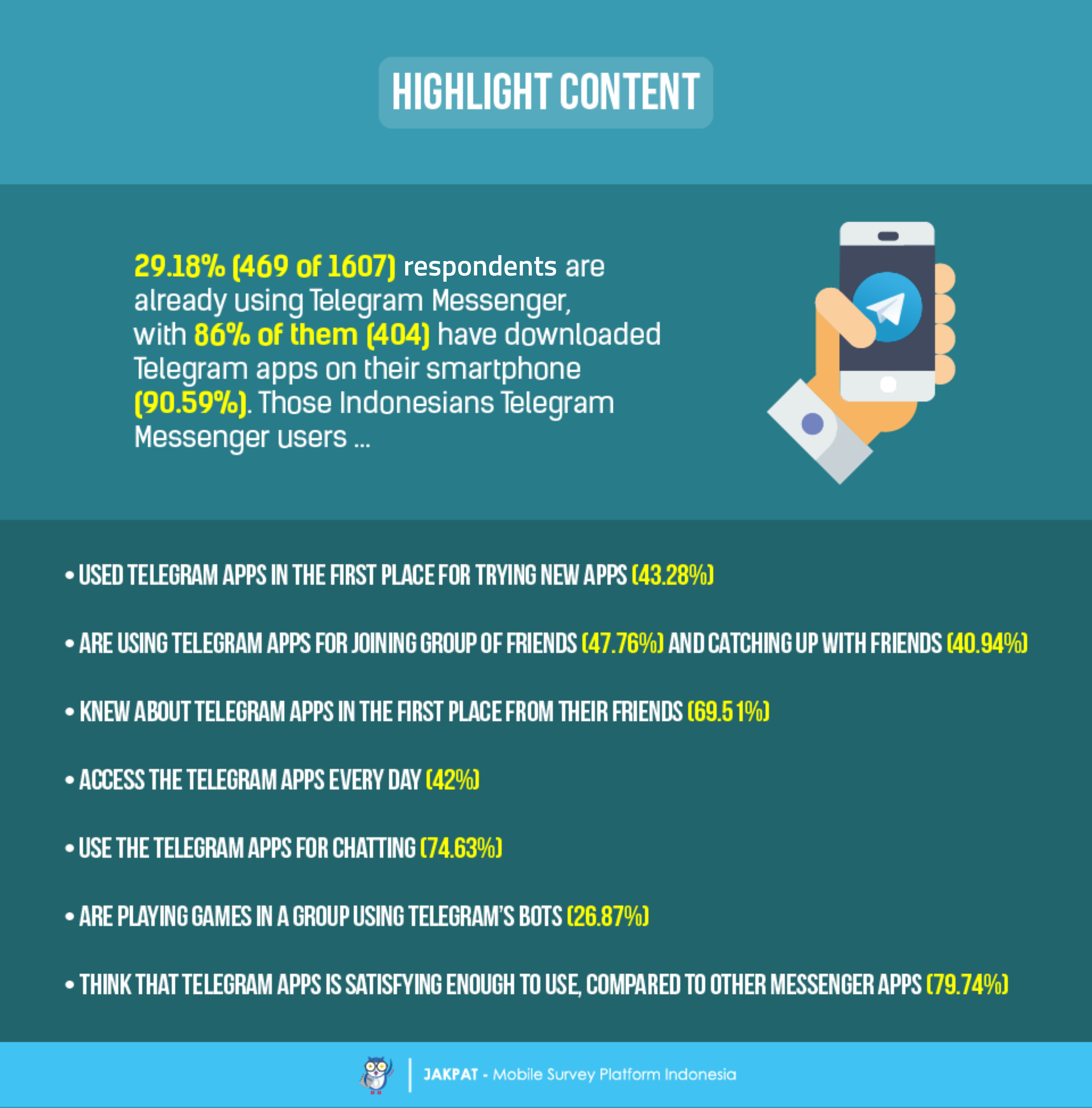 First of all, we found out that only 29.18%, which is 469 out of 1607 respondents are already using Telegram, with most of them (89.55%) use smartphone to access it. Out of 469 respondents who have tried using Telegram, apparently most of them (86%) admit that they have downloaded Telegram apps. Almost all of them (90.59%) download Telegram apps on their smartphone, while there are 13.37% of them who download it on their tablet. 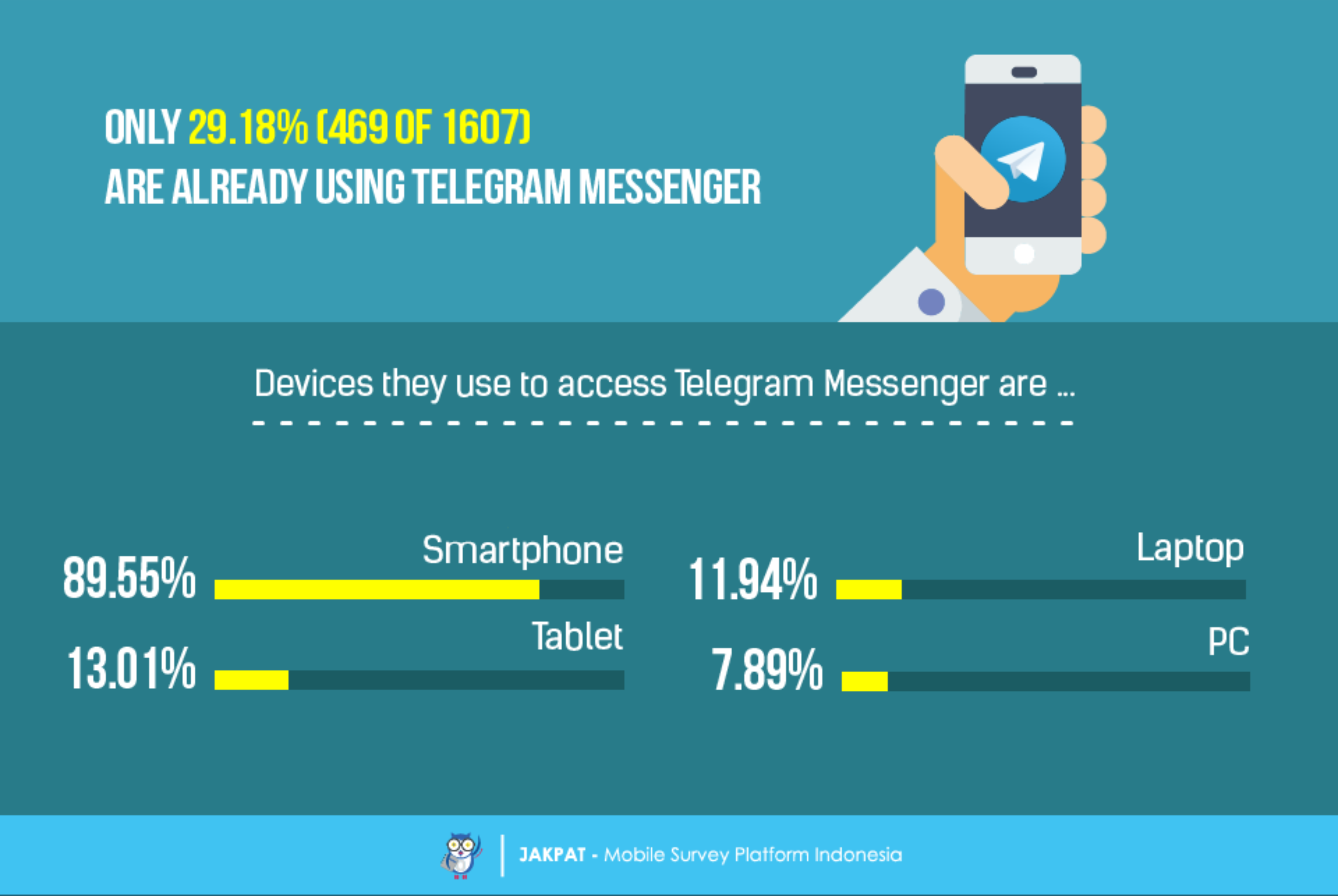 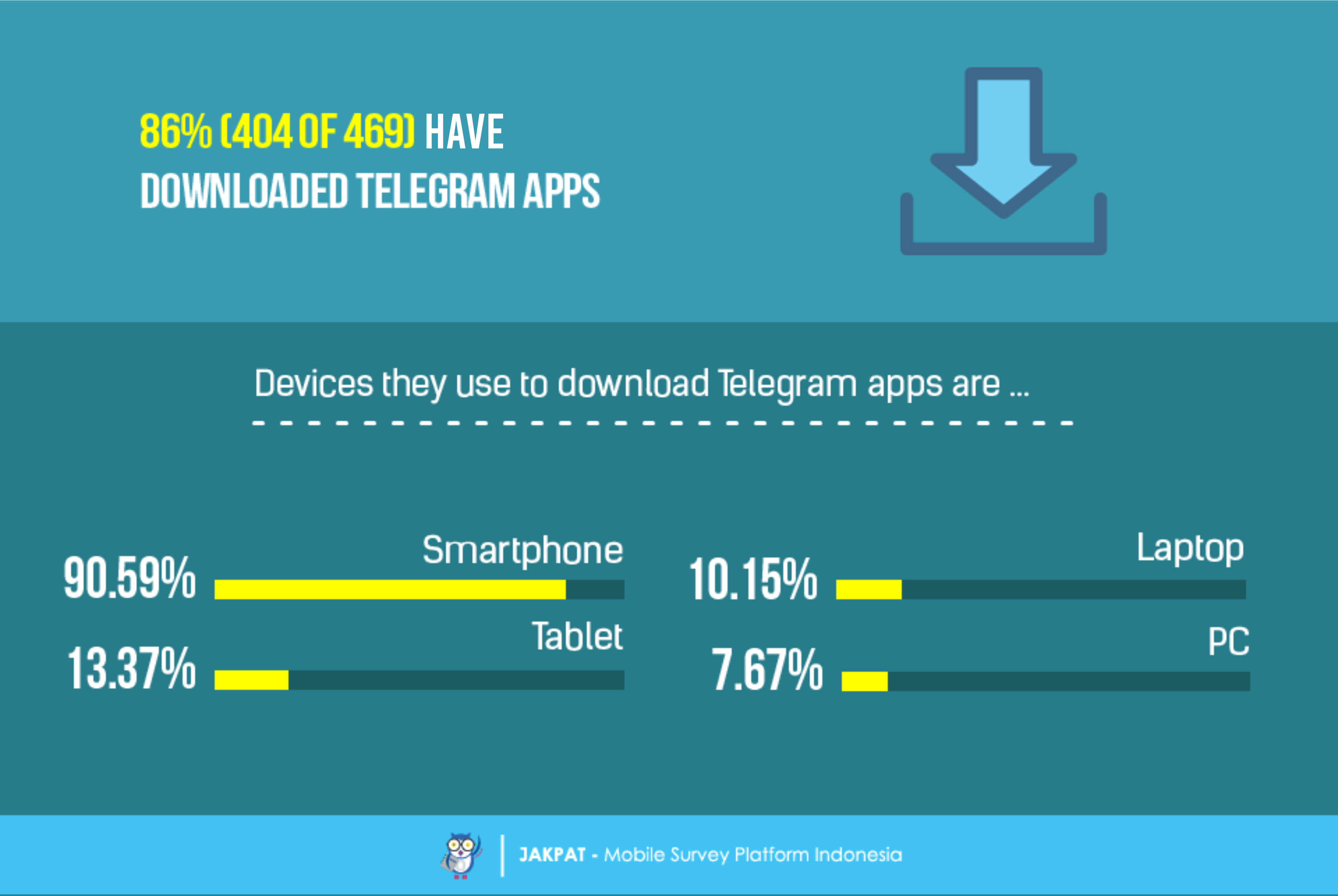 Next, when asked about the reason why they use Telegram in the first place, apparently Indonesian users answered that they were just trying new apps (43.28%). Besides, there are also some of them who use Telegram because their friends are also using it (34.33%). Moreover, when asked about the purpose of using Telegram, apparently most common answers by Indonesian users are for joining group of friends (47.76%) and for catching up with friends (40.94%). These findings show that Indonesian communal culture is depicted in the way they communicate through any channel, including Telegram. This is in accordance with the next findings about where Indonesian Telegram users knew about Telegram in the first place. Apparently, most of them (69.51%) knew it from their friends. Furthermore, more than half of them (53.30%) admit that they searched for more information about Telegram before using it, with most of them got the information from the internet (68.80%) and their friends (49.20%). 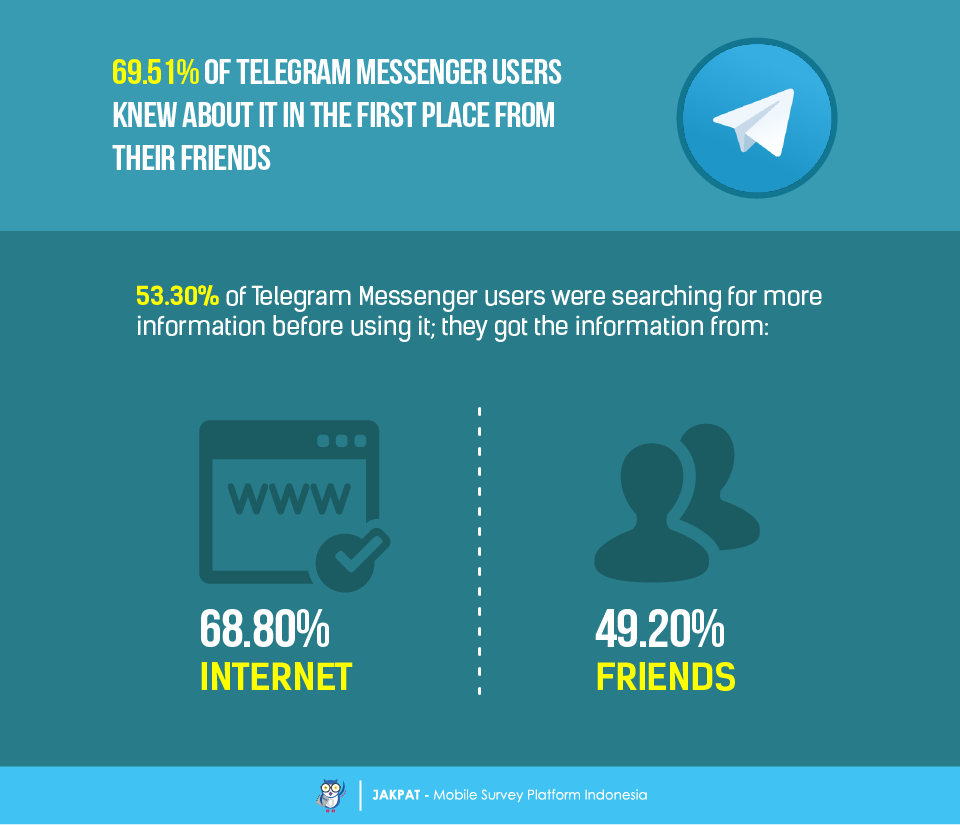 Out of our respondents who are Telegram users, we found that 32.41% have been a user for less than a month, while there are 28.14% of them who admit that they have used Telegram for one to three months. Hence, we found that there are 42% of Telegram users who access the apps every day. Averagely, they access Telegram for one to three hours (39.09%) and for less than an hour in a day (36.55%). When asked about what activity they do when accessing Telegram, most common answers are chatting (74.63%) and sharing files (42%). Besides, there are also 20.04% who use Telegram for using stickers and GIFs, 17.70% who use it for playing games, and 15.14% who use it for secret chatting. Regarding to the game, 26.87% of Indonesian Telegram users are playing games in a group using Telegram’s Bots. In addition to that, there are three kinds of Telegram’s game that are famous among its users: Famili 100 (26.98%), Werewolf Game (21.43%), and Poker (19.05%). 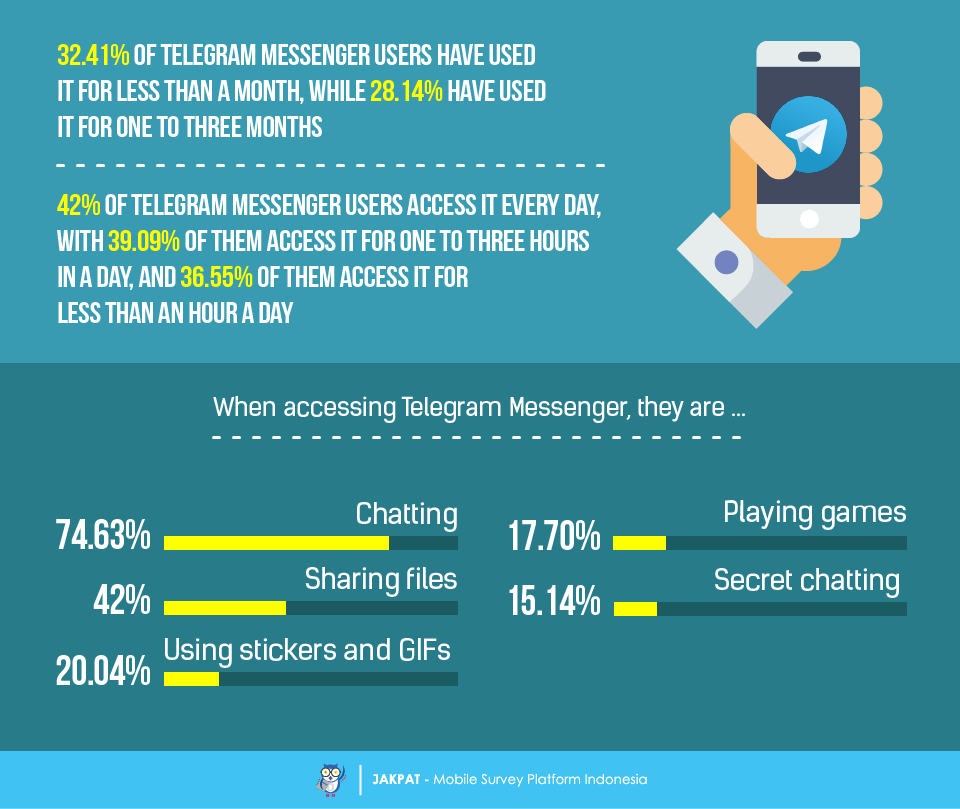 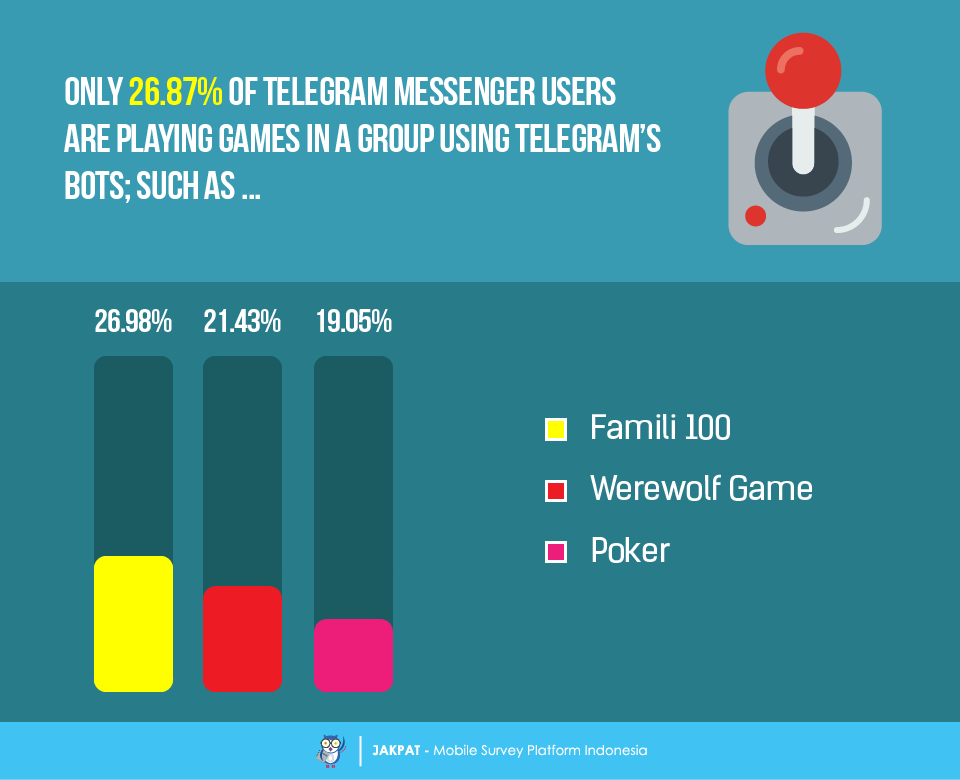 Regarding to the satisfaction scale of using Telegram by the Indonesian users, apparently most of them (79.74%) admit that they find the apps is satisfying enough to use, particularly in compare to other messenger apps. There are 24.95% who give 8 points in the satisfaction scale, which means they are satisfied in using Telegram. As a further note, the satisfaction scale is ranging from 1 to 10, with 1 is standing for “very dissatisfied” and 10 is standing for “very satisfied”. Lastly, we asked those respondents who haven’t used Telegram yet (1138 out of 1607 respondents) whether they have interest in using the apps. Apparently, more than half of them (53.95%) admit that they’re interested in using Telegram sometimes in the future.