Apparently, endorsement has been the most popular marketing communication tool in social media. If you ever follow the account of TV celebrities, movie star, singer, or other famous names in social media you will easily spot them endorsing product from various brands. From the small-medium scale enterprises to the big one, both use celebrity endorsement very often. Apparently, it seems like as long as you have big number of followers, popularity, and likes, you may become the perfect candidate of endorser. However, the subjected opinion is not enough in measuring the worthiness of one person to be an endorser. First of all, brand should clearly segment their consumer target as well as their audience target so that they can perfectly put efforts to approach them. Second, they must select the media that will be used, so that they can specifically understand their target’s media habit. At last, they should know really well famous names in each social media and their suitability with brand’s value. To be able to gain deep insight about public perceptions of endorser in social media, we conducted a survey toward 262 respondents in nationwide. Three social media platforms were studied such as Instagram, Twitter, and YouTube. The rationale of choosing three subjected platforms was based on their popularity among Indonesian netizen.

Instagram has been the rising star of popular social media among Indonesian. This photo sharing platform was able to attract many Indonesian netizen, especially youth. Interestingly, our previous study revealed that most of Indonesian Instagram users were following celebrity’s account. We currently did some rechecked regarding this finding and found the same result. Both men and women were following different type of celebrity accounts in Instagram. However, moving to the more specific content they followed in Instagram, men were more likely to follow accounts that shares travelling and joke/parody contents. Unlike the men, women chose to follow different kind of contained information in particular accounts. They were more likely to follow culinary and online shop in Instagram. 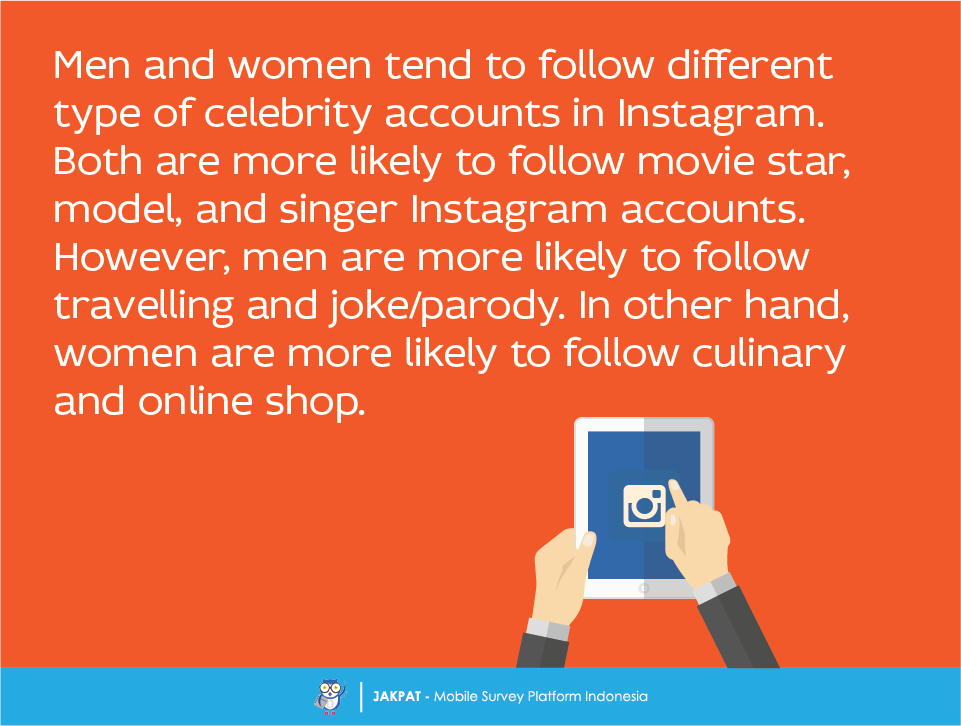 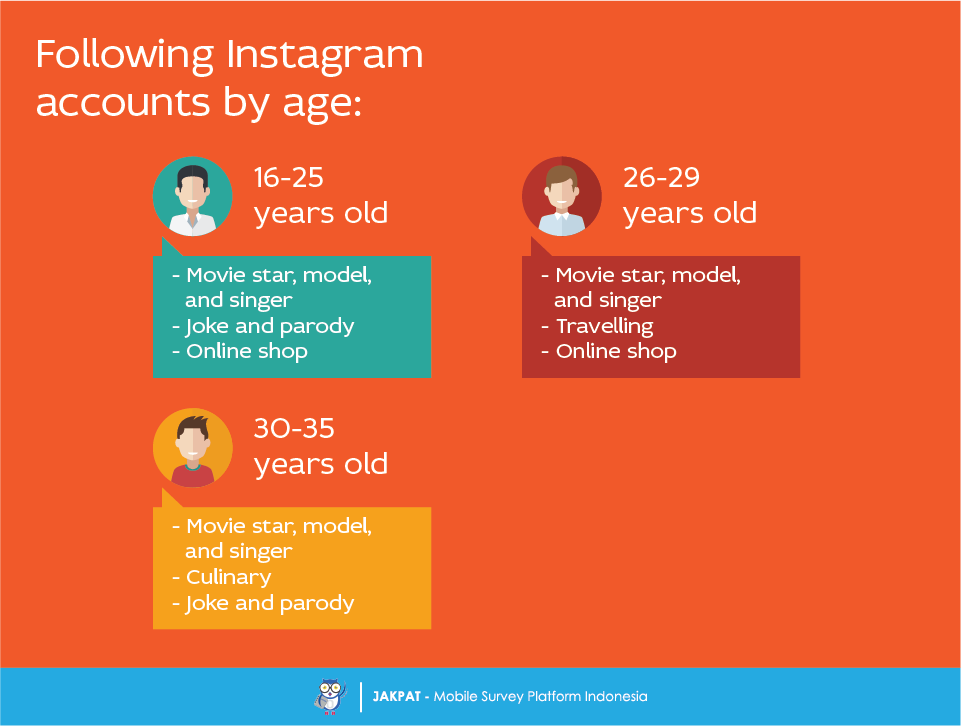 We also tried to discover their response habit regarding the post that was sent by their followed Instagram accounts. Interestingly, 34% of them did absolutely nothing when the posy appears on their timeline. To get better picture of this finding, we tried to seek the response of the other 66% respondents who gave response toward the post. Most of them were tapping love to the post, fewer of them were giving comments, and the least were mentioning their friends’ Instagram accounts. 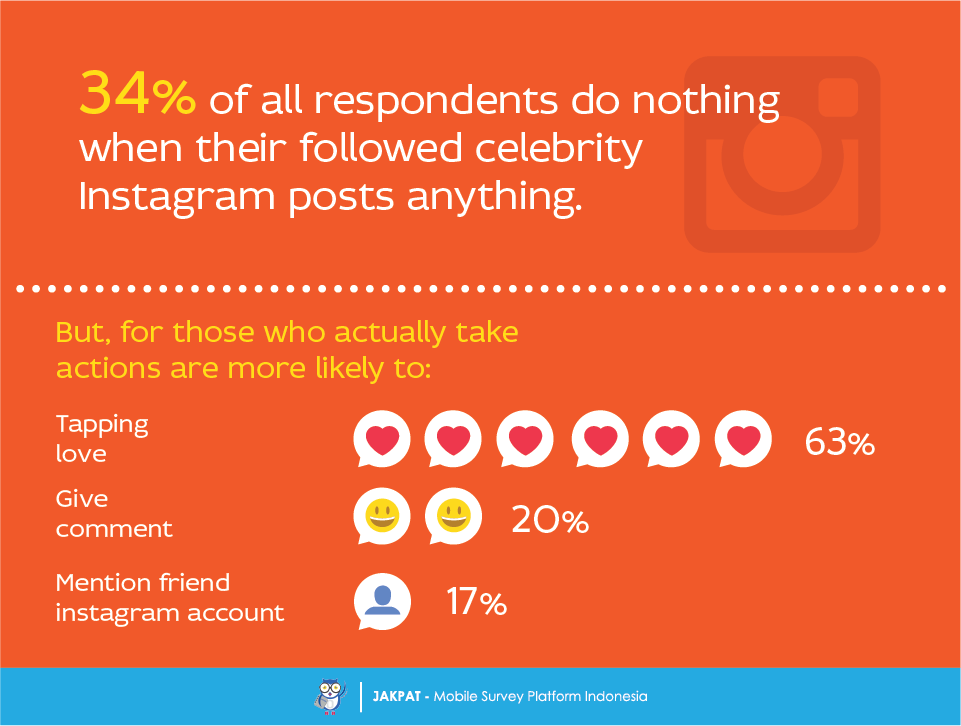 At last, we tried to see the top Instagram accounts among Indonesian. Five names were gathered from respondents’ response. @dagelan, @raisa6690, @riaricis1795, @ayutingting92, and @raffinagita1717 become the most mentioned names among them. 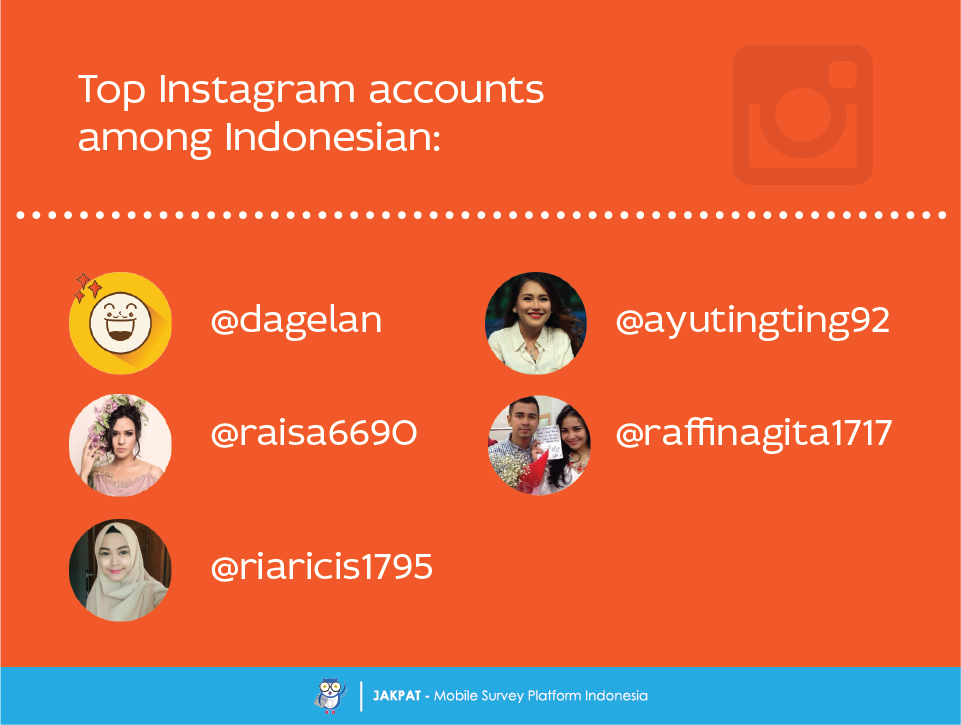 Although Twitter has been popular much earlier than Instagram, it does not make Twitter lose its charm. It was proven that Twitter still plays the role as the alternative source of information among Indonesian netizen. First of all, we would like to see the top three content-based accounts followed by Indonesian. Over all, there was no significant difference among age or gender regarding the finding data. Top three Twitter accounts followed by Indonesian were TV or movie star, news portal, as well as joke and parody accounts. 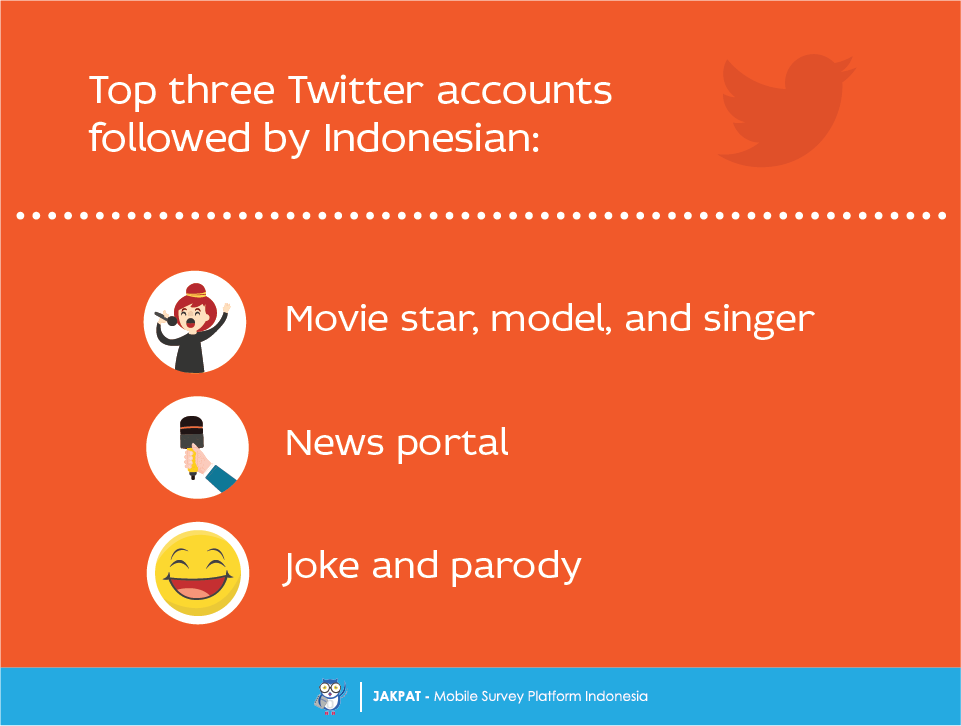 Netizen response habit regarding the post of their followed accounts was also examined. Similar with netizen response in Instagram, Twitter users were more likely to do nothing and only reading the tweets. Only few of them retweet the tweets, and even fewer who reply or favourite it. 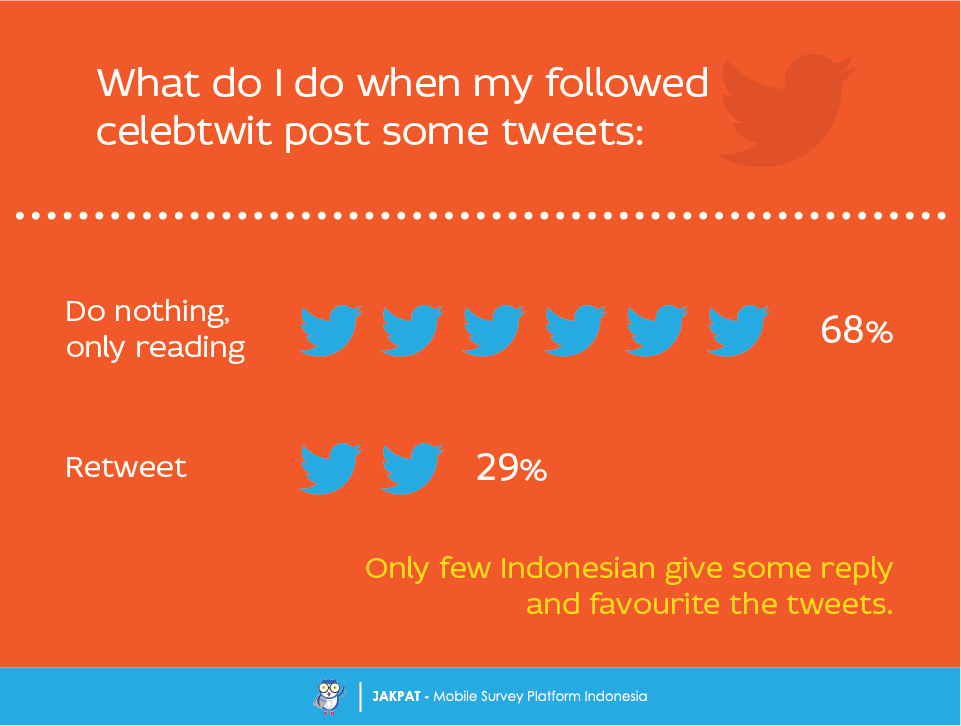 Unlike the top accounts in Instagram that was quite vary, top Twitter accounts among Indonesian was dominated only by @radityadika, followed by @RaffiAhmadLagi. With all due respect to other Twitter accounts, but both accounts were mentioned very often by our respondents. 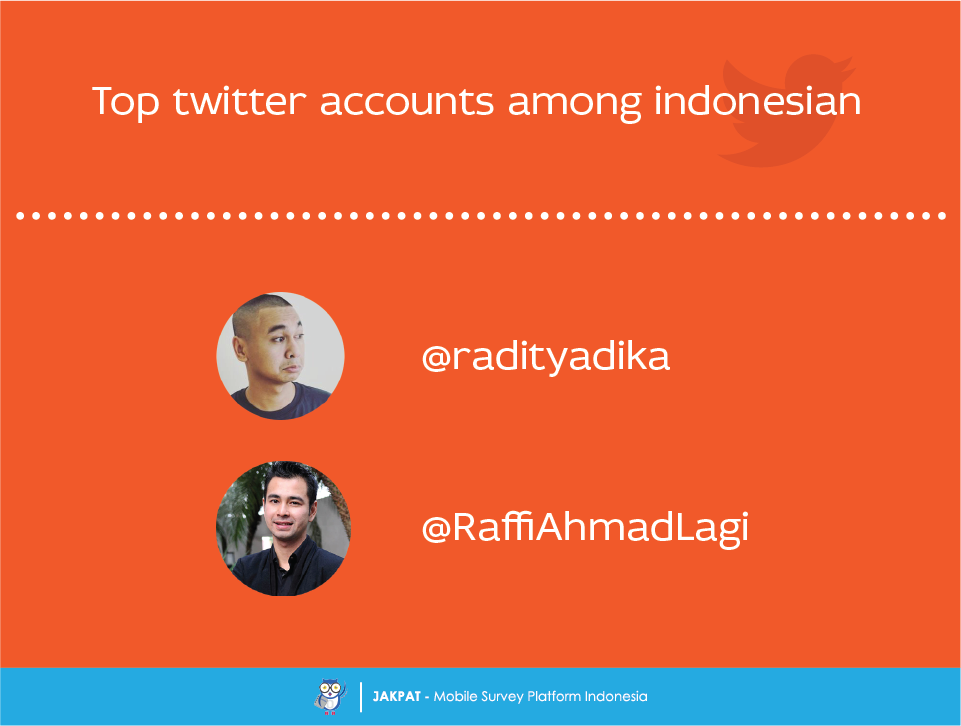 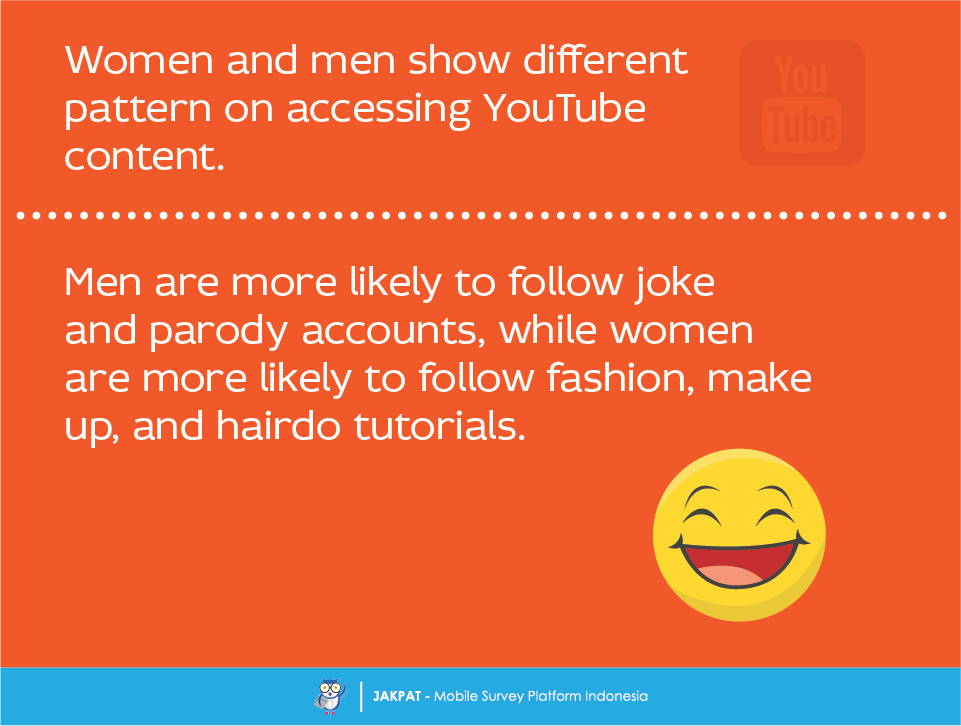 To get the bigger picture of overall Indonesian youth netizen access on YouTube content, we discovered that in general they were more likely to watch and subscribe several content-based accounts. Those accounts were joke and parody accounts, records of movie or TV program, and music video clip. 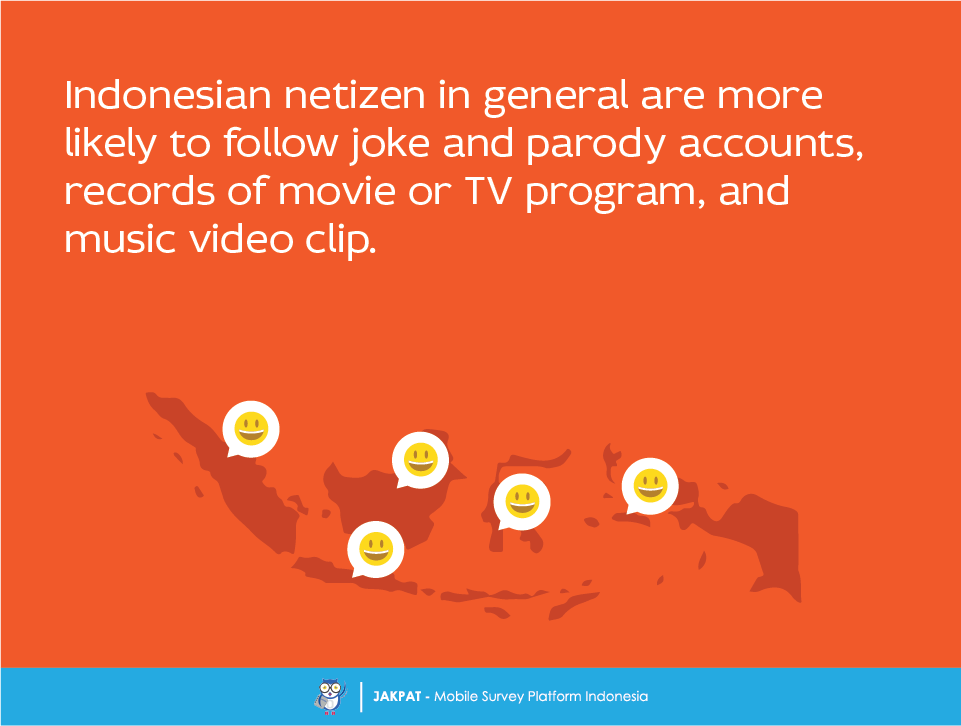 Measuring netizen response habit on a video in YouTube, only 29% of them subscribe the account after watching their video. Moreover, only 6% of them gave comments on the video they watched. Similar with the response habit in Instagram and Twitter, most of them were just watching the video. Fewer of them gave like or dislike toward the video, share it to their other social media accounts, and download it. 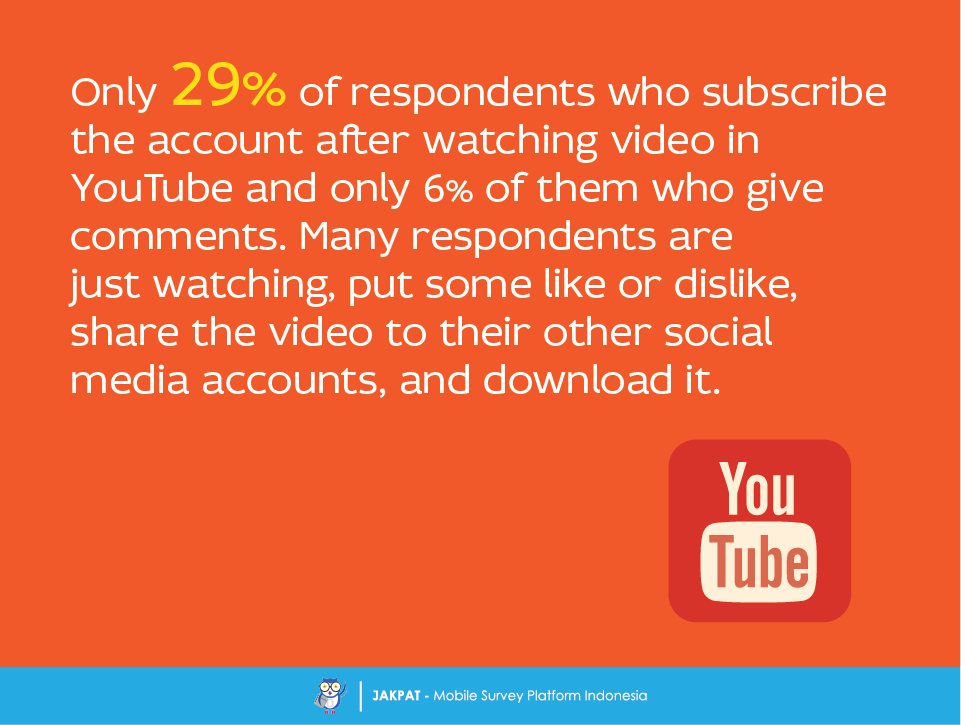 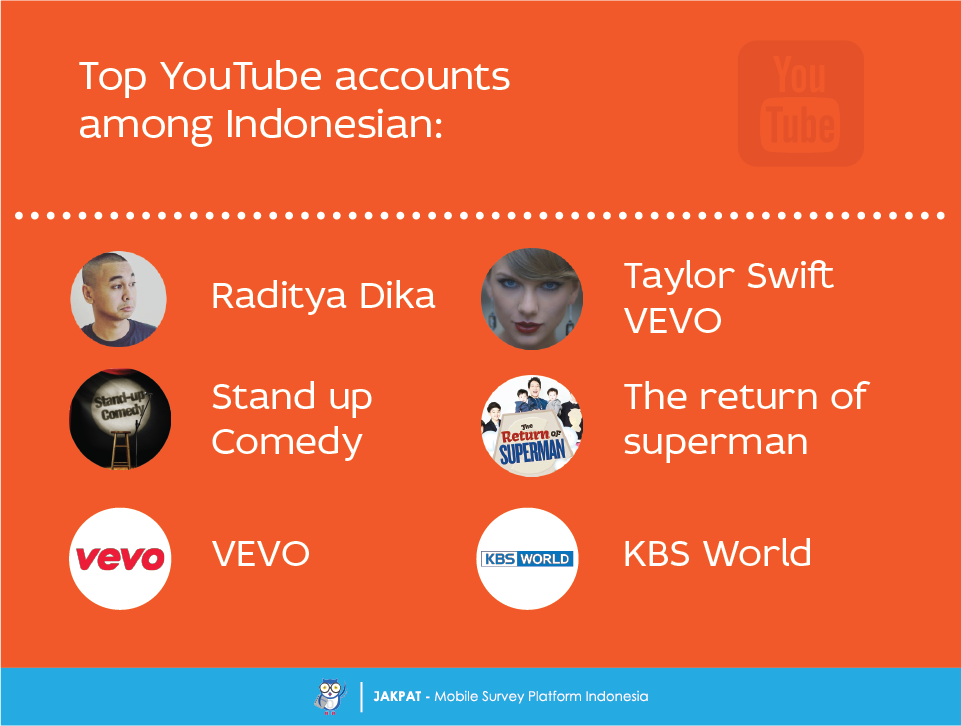