Donut is one of Indonesian’s favorite snacks. Derived from the word “doughnut”, donut is a type of fried dough confectionery or dessert food. Donut is popular in many countries, including Indonesia of course, and prepared in various forms as a sweet snack that can be homemade or purchased in bakeries, supermarkets, food stalls, and franchised specialty outlets.* In Indonesia, the donut’s market is dominated by two franchised outlets: Dunkin’ Donuts and J.CO Donuts. It is interesting to see how Indonesian’s preferences toward those two outlets, since one of them is an American company and has been the market leader for years, while the other one is Indonesian and has become the fastest growing chain in the country. Regarding to that matter, Jakpat recently conducted a survey involving 386 respondents with a range of age from 16 to 40 year-old. Those respondents are currently living in 10 big cities of Indonesia, including Jakarta, Bandung, Semarang, Surabaya, Bali, Medan, Balikpapan, Makassar, Lombok, and Yogyakarta. 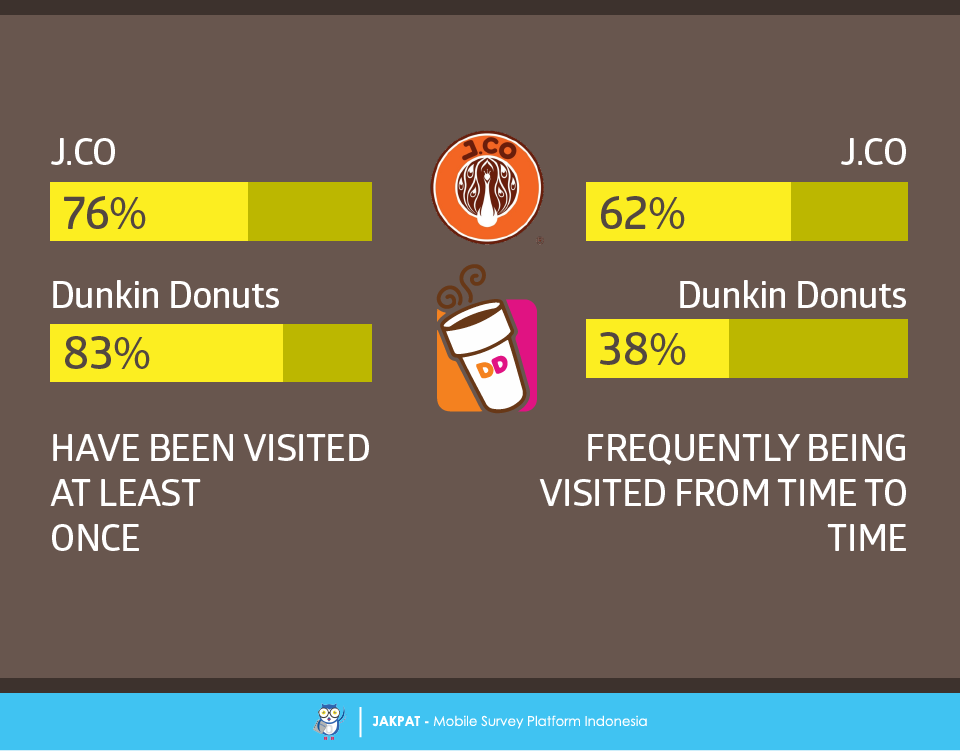 This survey begins with Indonesian’s awareness level toward both of Dunkin’s Donuts and J.CO Donuts. Apparently, Dunkin’ still has higher awareness level than J.CO (95% VS 88%), perhaps because Dunkin’ as the brand has been established way earlier than J.CO. Next, regarding to the frequent of being visited, there are more people who have been to Dunkin’ than J.CO at least once (83% VS 76%). On the other hand, when we were asking them which donuts outlets they frequently visited, it turns out they chose J.CO than Dunkin’ (62% VS 38%). 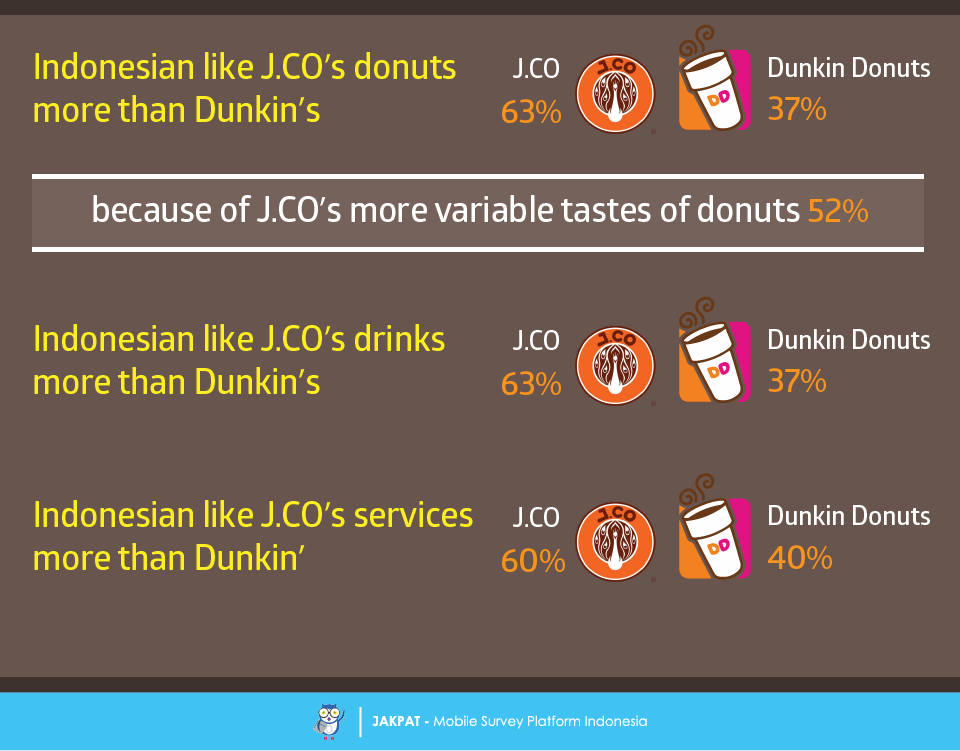 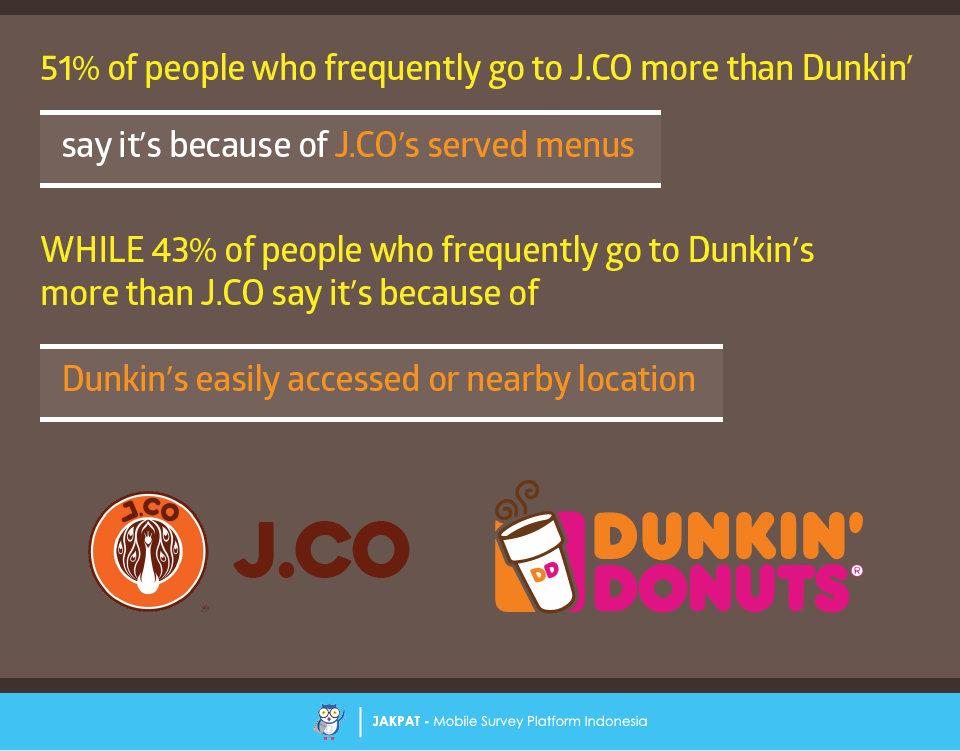 Going to donut outlets is based on the culture of modern and dynamic lifestyle of our society. Practically, it also means that the activities of going to this place are a way to contact and expand your business and social network. Based on that reality, we tried to take a look on the consumers’ preferences in terms of activities and habits while they were there. We found that consumers prefer J.CO over Dunkin’ by 59% VS 41% to spend their time alone while visiting these outlets. On the other hand, our respondents prefer J.CO over Dunkin’ in regards of hanging out with friends activity by 55% VS 45%. On the subject of romantic appointments, J.CO is more preferable than Dunkin’ by 66% VS 34%. Spending time with family, our respondents prefer J.CO than Dunkin’ by 61% VS 39%. While having a meeting with colleagues, J.CO is more preferable than Dunkin’ by 61% VS 39%. 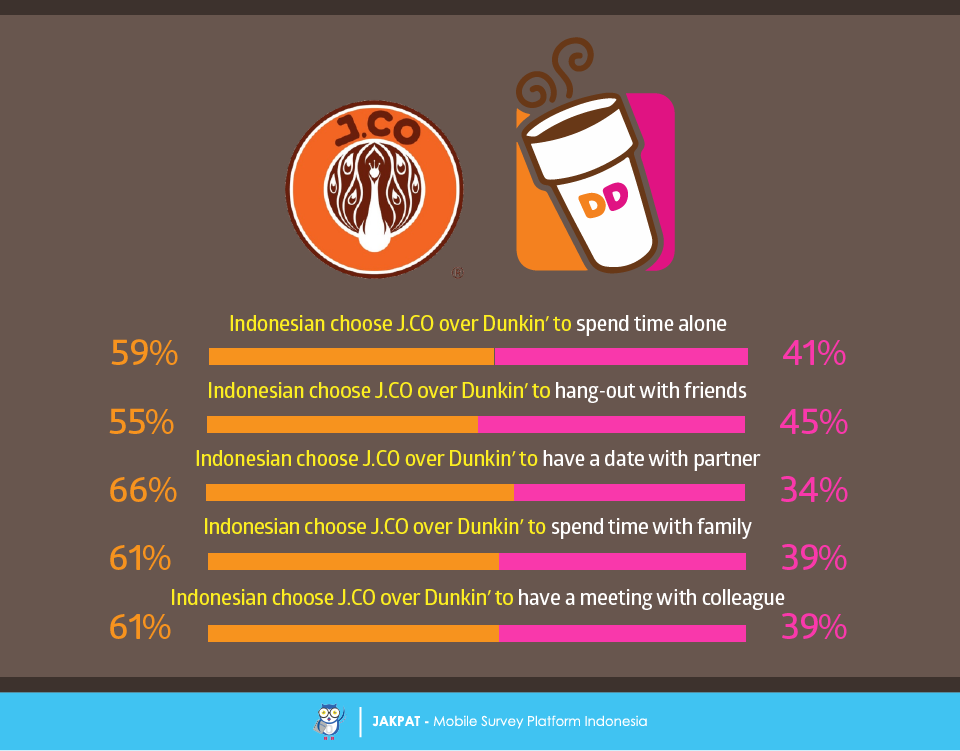 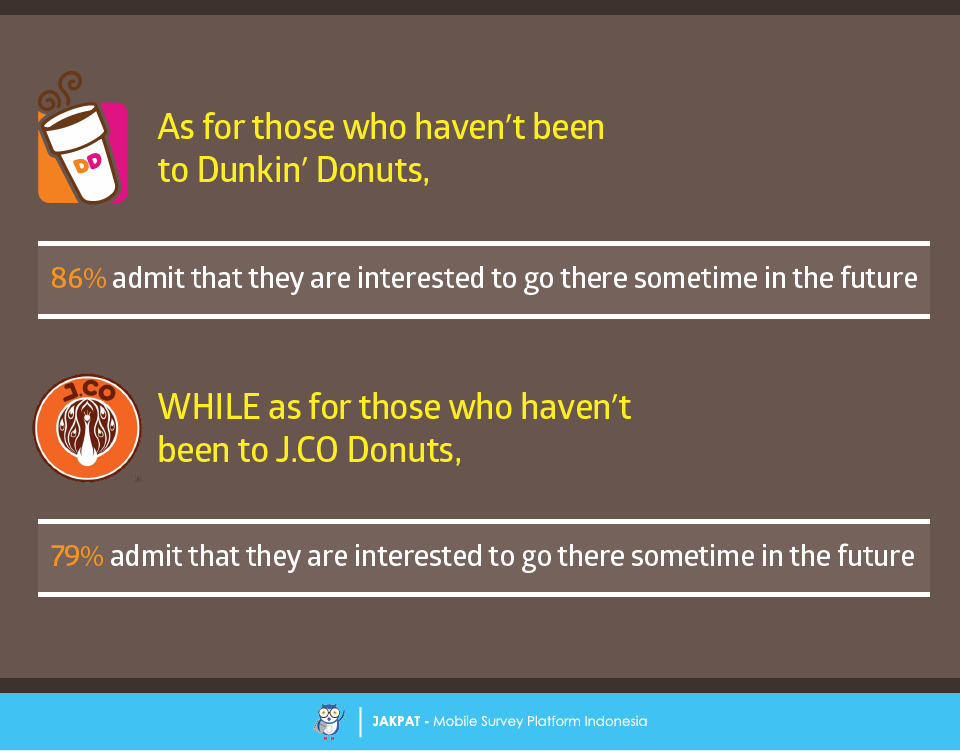