“Pokémon GO” is hype nowadays. After publishing our survey report on Indonesian mobile users toward the game last July[1], now we would like to dig deeper about how playing the game affects the life of the players. Regarding to this matter, recently Jakpat has conducted a survey in order to see further towards how playing “Pokémon GO” changes the life of its players. This survey involved 573 respondents from across Indonesia who is playing “Pokémon GO”. For the further notes, Jakpat’s respondents in this survey are Indonesian smart-phone users, with a range of age from 16 to 45 year-old. 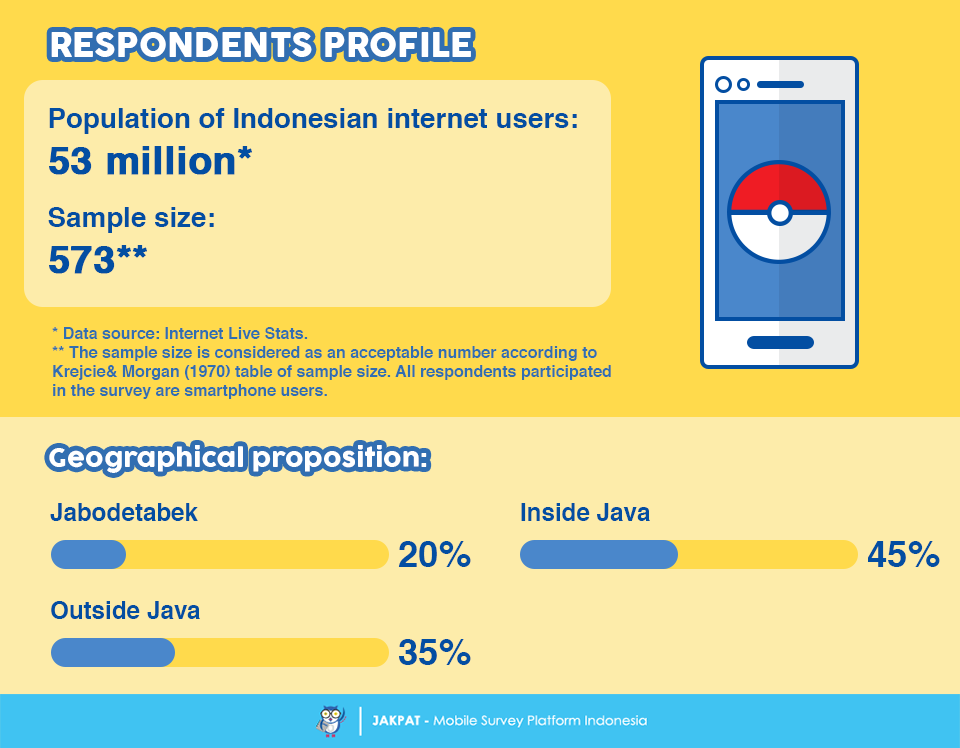 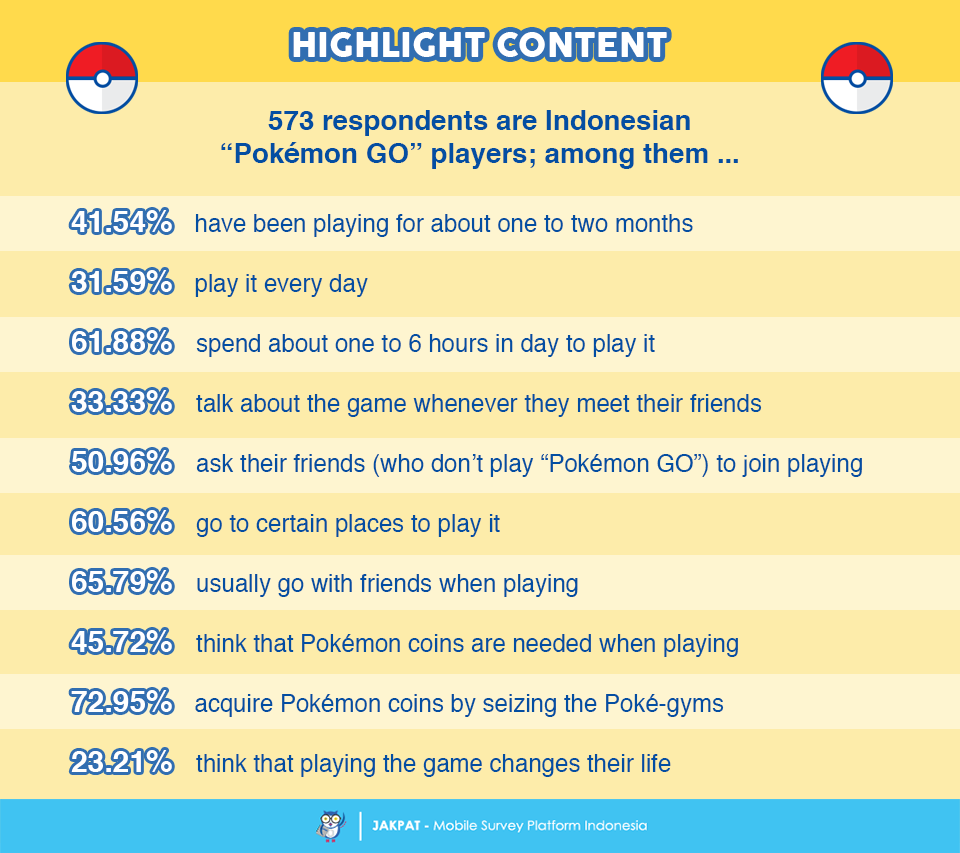 We divide this survey report to five chapters, first of all is about the time of playing “Pokémon GO”. Apparently, most of them (41.54%) have been playing the game for about one to two months already, while some of them (29.84%) have been playing the game for only less than a month. Most of our respondents play “Pokémon GO” every day (31.59%), and also once in every two or three days (30.89%). About the amount of time they spend for playing in a day, most of them (61.88%) spend about one to six hours. 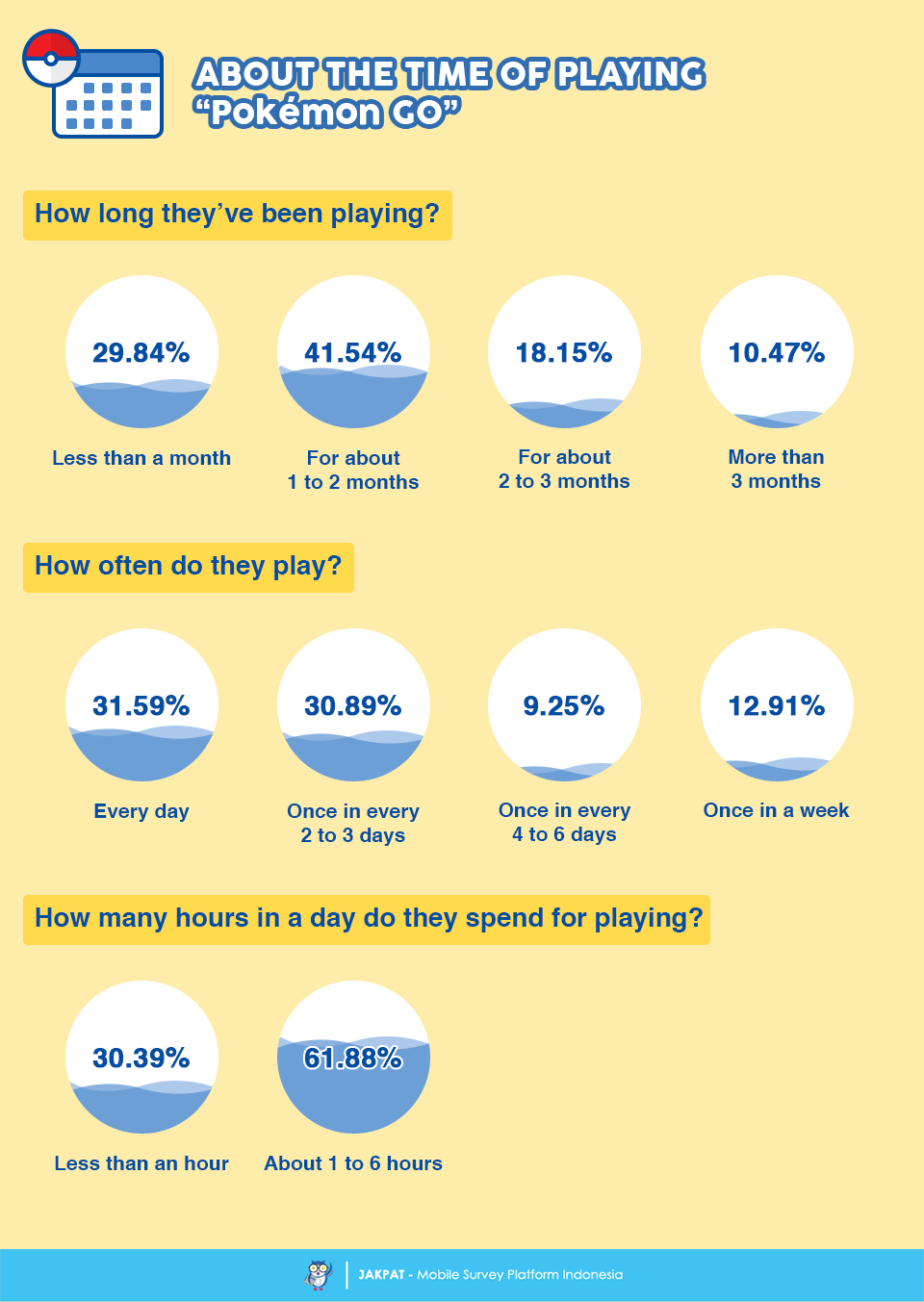 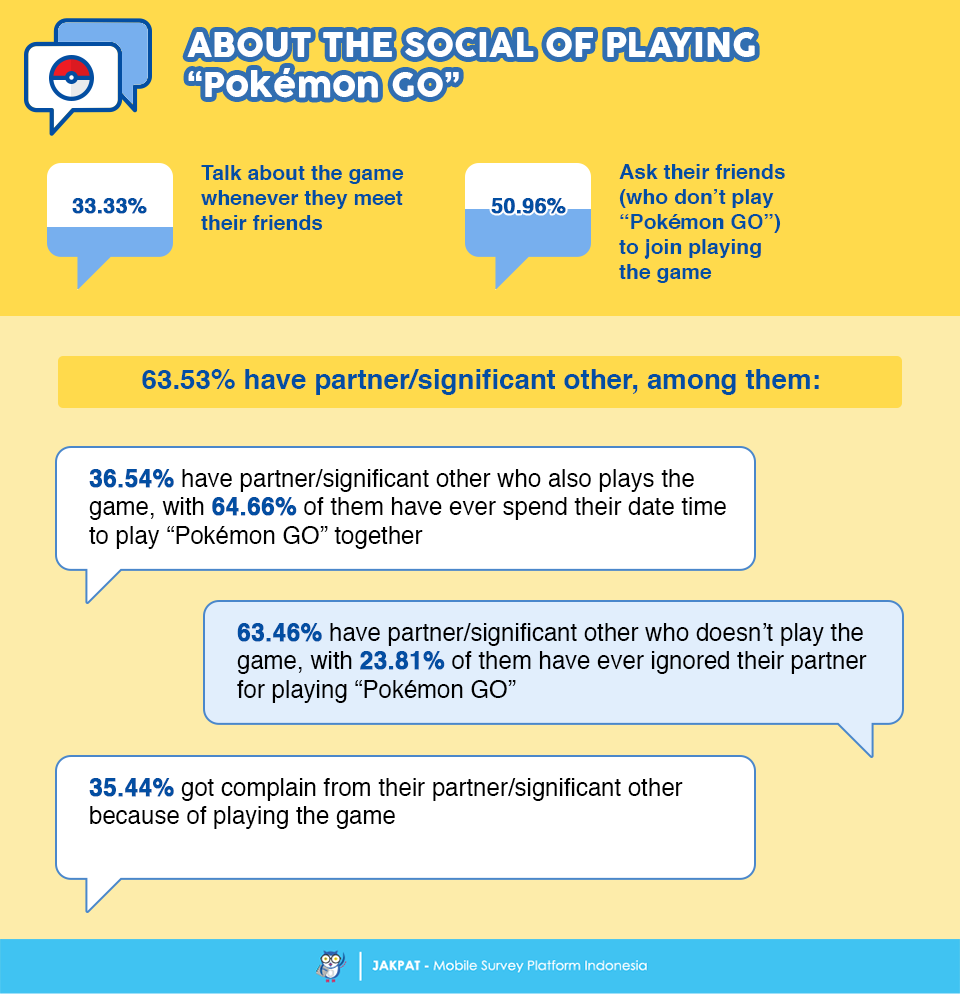 Second chapter is about the social of playing “Pokémon GO”. Apparently, some of our respondents (33.33%) admit that they talk about the game whenever they meet their friends. Hence, more than half of them (50.96%) say that they ask their friends who don’t play the game to join, or at least try to play the game. We also find that most of our respondents (63.53%) currently have partner, with 36.54% of them admit that their partner also plays the game, while the other 63.46% have partner who doesn’t play the game. Out of all players who currently have partner, 35.44% of them admit that they often got complain from their partner because of playing the game.

Third chapter is about the travel of playing “Pokémon GO”. We find that most of our respondents (60.56%) admit that they go to certain places to play the game. Furthermore, most of them (65.79%) say that they usually go with a companion, such as their friends, while some of them (34.21%) admit that they just go by themselves. Regarding to how far they are willing to travel for playing the game, many of them (46.60%) say that they would travel from at least one kilometer up to ten kilometers just to play the game. 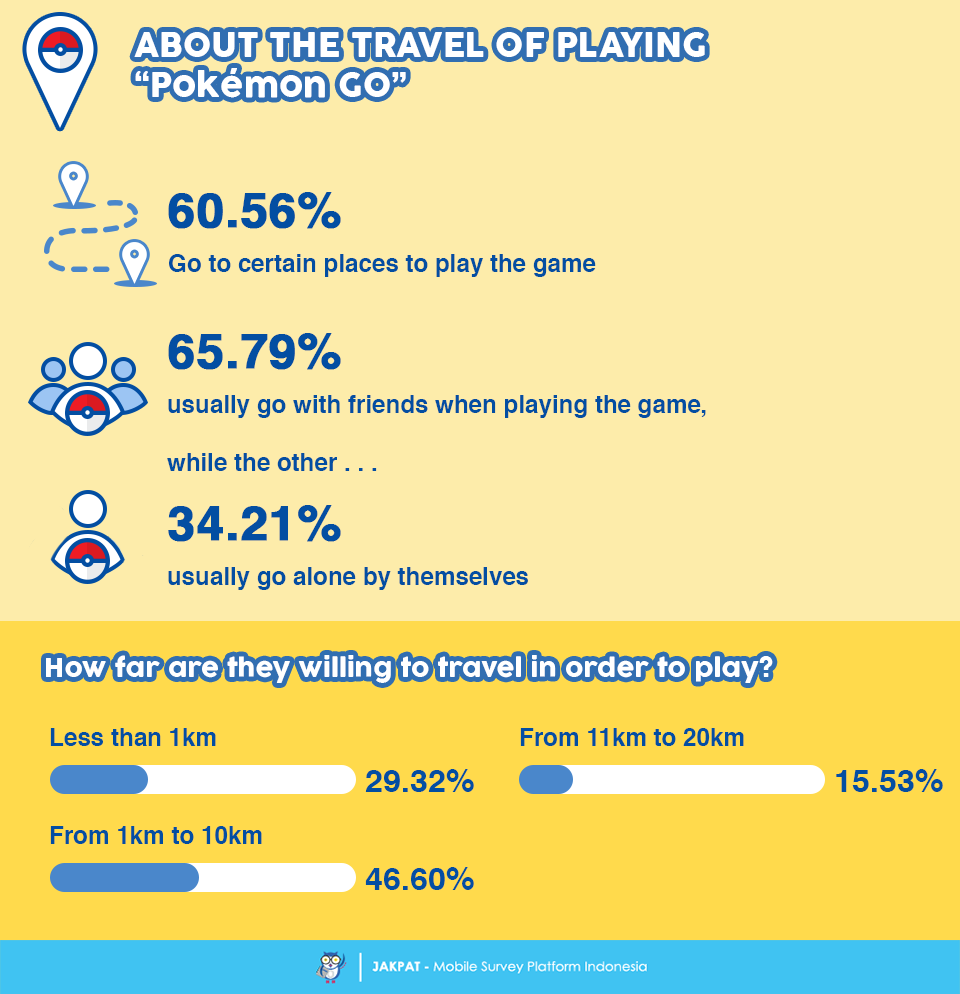 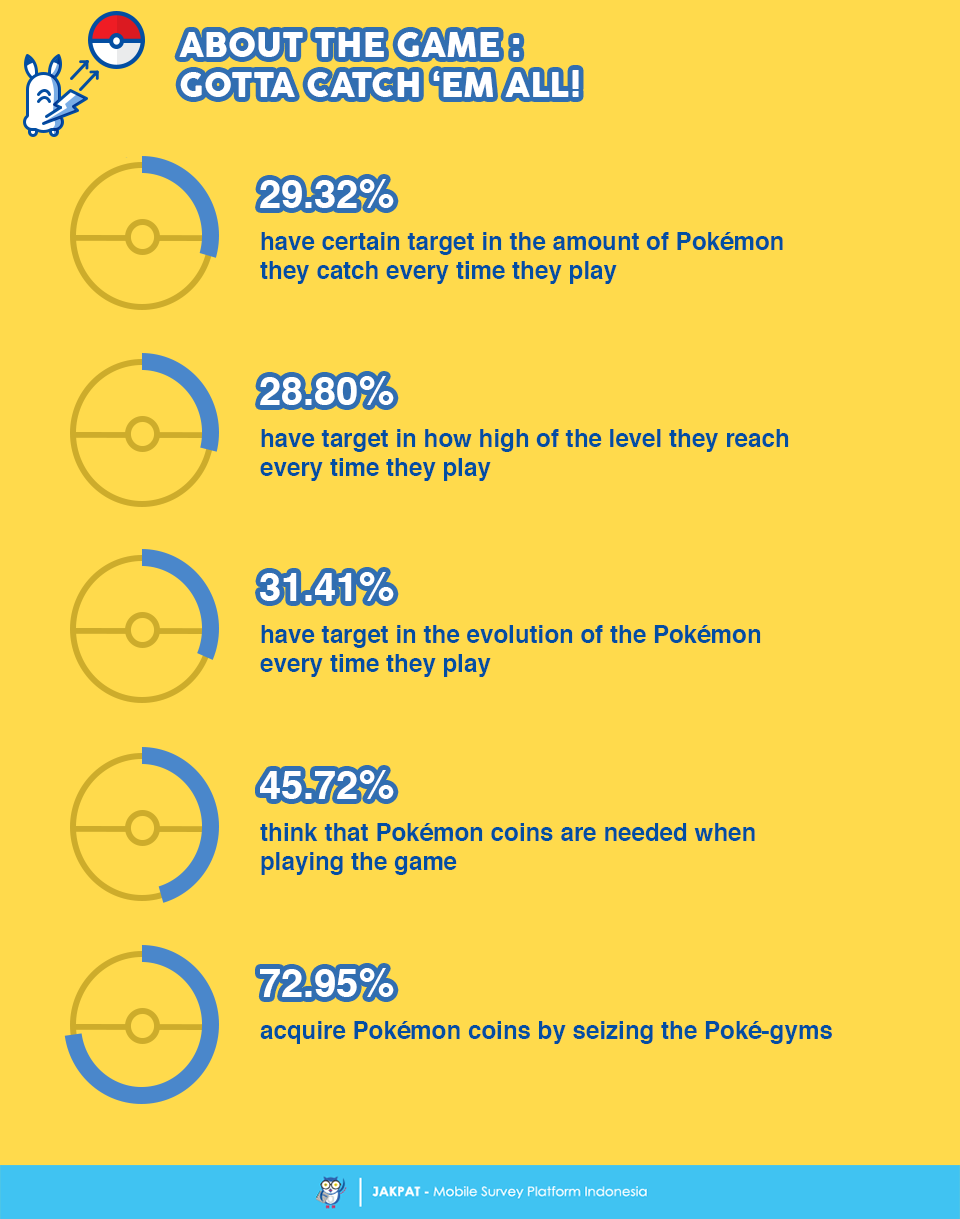 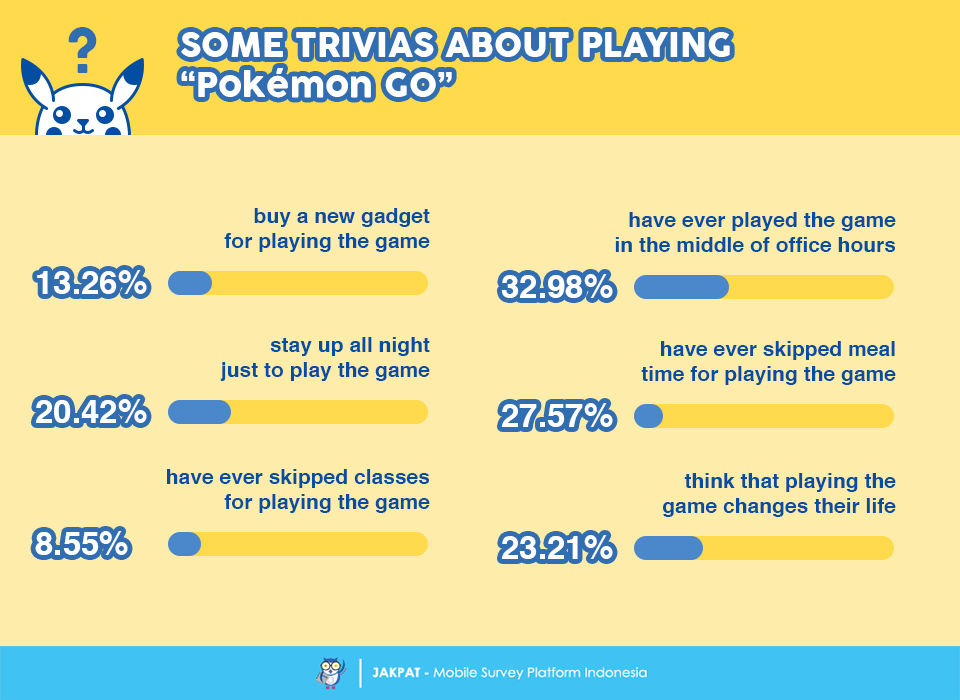 [1] See the survey result in https://blog.jakpat.net/indonesias-mobile-users-on-pokemon-go-survey-report/